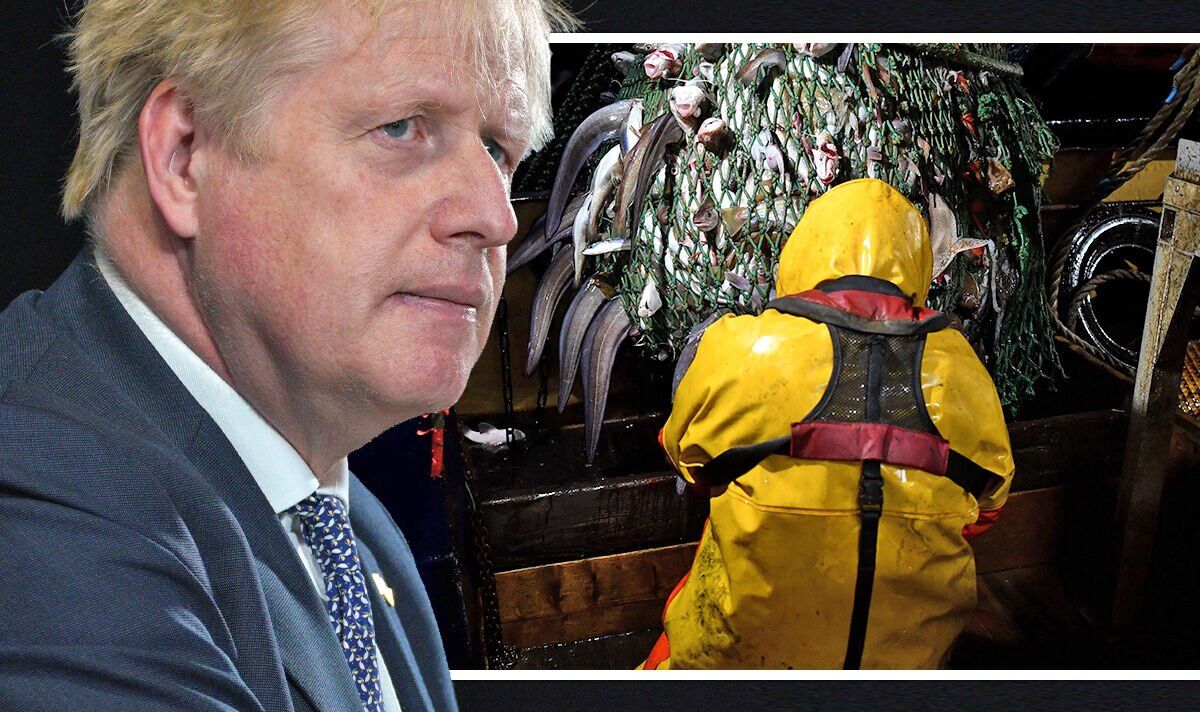 The Prime Minister posted on Twitter a video of him backing Helen Hurford in the Tiverton and Honiton by-election. Mr Johnson said the Tory candidate would “stick up for British food and farming”.

In the clip, Mr Johnson and Ms Hurford visited a farm in the constituency and touted the Conservatives’ support for “food and farming”.

He said: “Vote for Helen Hurford to stick up for British food and farming on June 23.”

However, June Mummery, founder of Renaissance of the East Anglian Fisheries, blasted the Prime Minister’s calls to back British food on social media.

The former Brexit Party MEP said on Twitter after Mr Johnson’s call to vote: “Stick up for British food?

“We have an ocean full of fish but UK fisherman can’t catch it.

“80 percent of the fish the EU catches comes from UK waters these vessels are hammering our waters unmonitored and unregulated.

“You sold out the UK fisherman and betrayed coastal folk.”

A report, a collaboration between the University of York, New Economics Foundation, University of Lincoln and marine consultancy service ABPmer, said despite the Government’s claims the UK’s total catch will only reach 107,000 tonnes per year, or 12.4 percent by value for all species, by 2025.

Dr Bryce Stewart, from the Department of Environment and Geography, at the University of York, said: “Government promises on Brexit and its benefits for the fishing industry were far in excess of what could be delivered.

“The industry became an icon of Brexit with claims it would correct past injustices and breathe new life into neglected coastal communities, but our study reveals the stark delivery gap between rhetoric and reality.”

The researchers analysed all available data on catch quotas, actual landings and the proportions of different fish species living in UK waters.

Dr Stewart added: “Most of the significant increases in catch quotas are for just a few fisheries such as western mackerel and North Sea sole and herring.

“Most fishermen, particularly those in small boats, have seen few if any benefits, so due to new challenges around trade are likely to be worse off.

“Many people in coastal communities who were pinning their hopes on post-Brexit reforms feel betrayed and this comes at a significant cost to their wellbeing and mental health.”

The Resolution Foundation think tank also warned in a report Brexit will lead to “painful adjustments” for the Scottish fishing industry.

Output of the fishing industry, which is largely based in Scotland, is expected to decline by 30 percent.

Sophie Hale, principal economist at the Resolution Foundation, said: “Brexit represents the biggest change to Britain’s economic relationship with the rest of the world in half a century.”

“Some sectors – including fisheries – still face significant change to come in the years ahead, but the overall services-led nature of the UK economy will remain largely unaffected.”