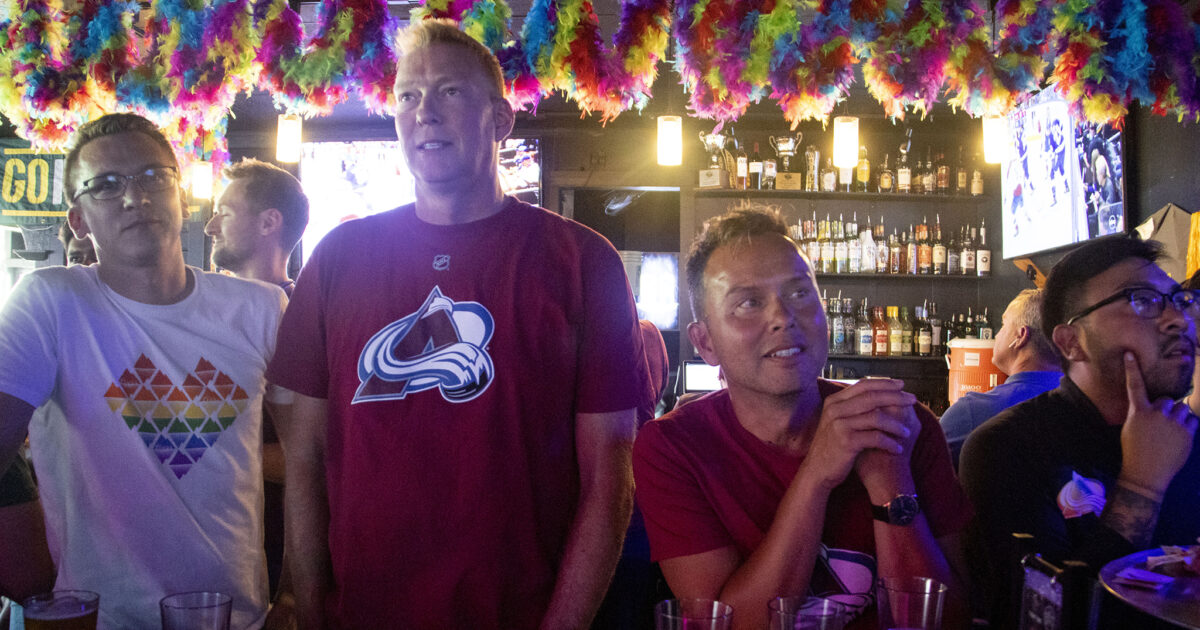 Before Game 4 of the Stanley Cup Final began, Denverites were on edge.

The reigning Tampa Bay Lightning bested the Avalanche 6-2 Monday night, ending the Avs’ chance to sweep the championship round, similar to their Western Conference series win.

But with a win Wednesday night, the Avs would go up 3-1 in the series, giving them a chance to win the cup, for the first time since 2001, at home on a Friday night.

So, during last night’s game we (Kevin and I) set out to find some fans, bandwagoners and general Denverites to chat with about the playoff buzz. We ended up at Tight End Bar, a gay sports bar on East Colfax, in a sea of rainbow flags and burgundy T-shirts. The consensus: Avs in five, baby.

“I was hoping for a sweep and Monday night was a down night, but I think we can take it in five,” said Sean Gould. “We have to win tonight so that we can win Friday night on the eve of Pride. Oh, my god. How awesome would that be?”

Gould’s been a hockey fan since the United States won the gold in Men’s Hockey at the 1980 Winter Olympics, beating the highly favored Soviet Union in an upset win. The Miracle on Ice game. He became an Avs fan after they won their first chip in 1996.

Gould said he’s been frequenting Tight End throughout the playoffs and the energy has been electric amongst die-hard fans, casuals and even those just stopping by for a slice. (We were told the pizza is on point.)

“People are cheering and I’m high-fiving people I don’t know,” Gould said. “A lot of people are on the bandwagon and that’s OK. It’s showing Denver pride and Colorado pride…Coming out of the pandemic, just coming out and being with people and being with community, it’s been great. Things are different now then they were pre-covid. I feel like there’s a lot more love and community because people need those connections. We need it for our mental health and this is contributing to my good mental health.”

Michael Pearl agreed. Pearl said he’s been making more of an effort to go out and get back into “normal” life. He’s not a hockey fan per se, but he enjoys watching sports. He stumbled across Tight End, discovered the pizza (see above note on pizza) and has enjoyed the space, especially since he doesn’t own a television.

“It’s a great opportunity for this business to make money and to have people come and spend their money and enjoy themselves in an environment that caters to what their needs are, and that’s all people really want,” Pearl said.

Pearl also enjoys supporting Denver teams, which he notes have been doing well. The Colorado Mammoth recently won the National Lacrosse League, beating the Buffalo Bandits 2-1 in the series (14-15, 11-8, 10-8).

Like Gould, Pearl said the Avs run for the cup is giving Denverites something to look forward to — something to participate in after not having many things since the pandemic began.

“If [the championship] helps bring people back together, I’m all for it,” Pearl said. “I’ve had people invite me over that I know are not even hockey fans, but it gives them something to participate in and do. It’s the timing, it’s so needed… It’s become such a habit of isolating and being away, people have forgotten how to call up some friends and say let’s get together…Denver’s going to go crazy when they win, and they will win.”

Gabriel del Canto and Cayden Eldridge are looking forward to the cool chaos that might ensue if the Avs capture the cup. Del Canto and Eldridge are originally from Washington, D.C., and naturally they support the Washington Capitals. But having lived in Denver for the past five years, they’re now rooting for the “home” team.

Like Pearl, del Canto and Eldridge said Tight End is providing a space for not only LGBTQ+ folks to be comfortable, but all patrons.

“There’s so many straight sports bars to go to,” del Canto said. “This gives you that comfort to be yourself and watch sports.”

Eldridge added, “I love going to straight sports bars, but it’s a different feel. People are still just as passionate about sports, but also, like he said, you can be yourself.”

As the game began, so did the cheers and the groans. Tampa Bay scored early. Gould said he might have to amend some quotes on the Avs winning in five. But soon after, Nathan MacKinnon tied up the score.

With screams of “go, go go” in the background, del Canto and Eldridge laughed at the hype. But they both agreed, it was nice to hear.

“There’s been so much lost time and now’s the time to go back to those missed opportunities,” del Canto said.

“It doesn’t matter where you come from, we’re all coming together to cheer for the same thing,” Eldridge said. “It’s been really great to have the Avs in the playoffs. The city is more alive. A win today and on Friday would be nice. We were just joking about whether they’re going to do a Pride parade and then the Stanley Cup parade back to back, which would be awesome.”

A gentleman’s sweep and subsequent back-to-back parades could be in Denver’s future. The Avs delivered Wednesday night. Andrew Cogliano came through first with a third-period goal to tie the game at 2. After being out since the start of the series with a broken thumb, Nazem Kadri secured the win with an overtime goal.