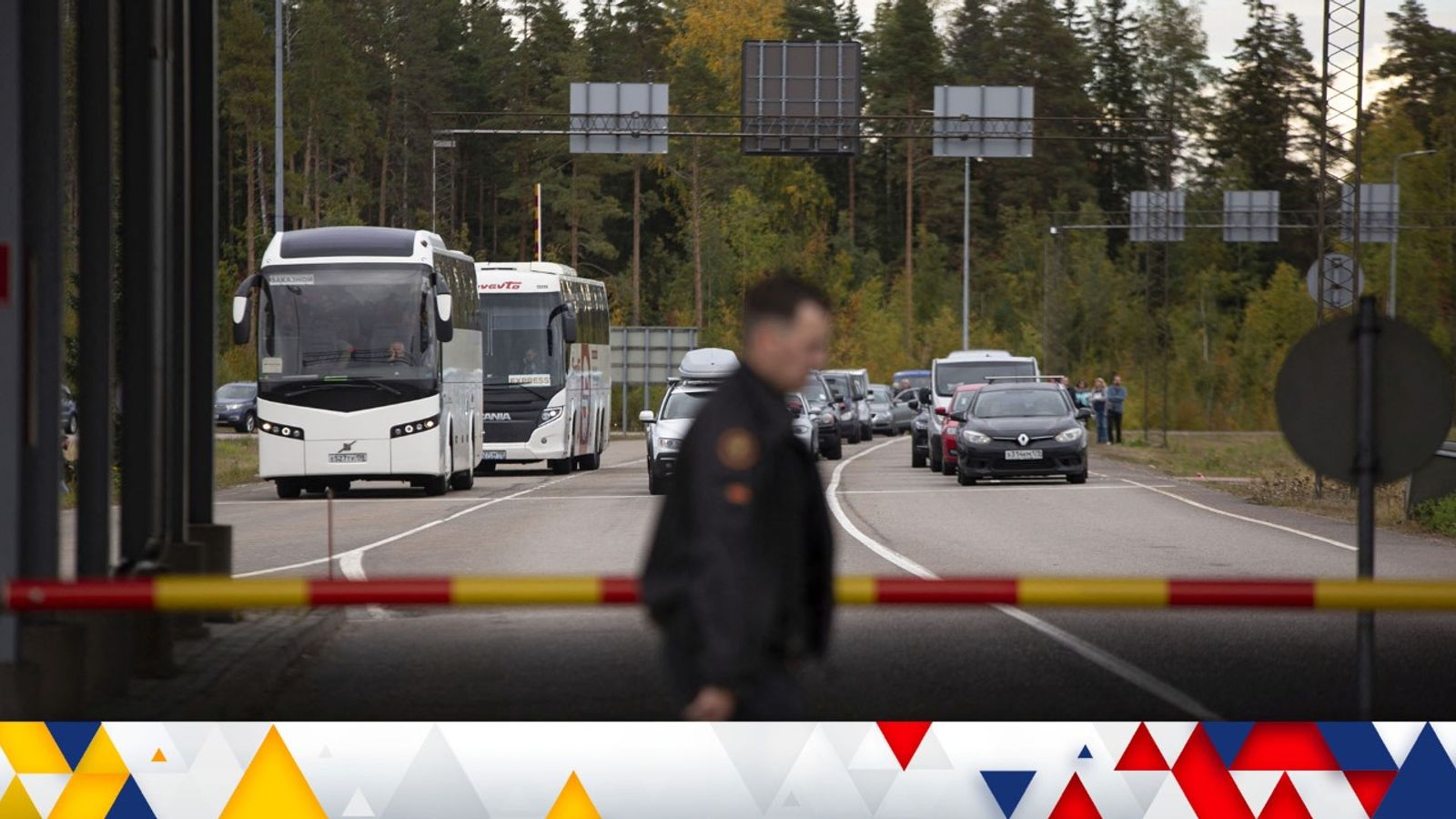 The exodus from Russia in the wake of Vladimir Putin’s call-up of 300,000 reservists continues, with people scrambling to escape to neighbouring countries.

Thousands are fleeing to avoid being sent to fight in Ukraine after the Kremlin declared a partial mobilisation.

One businessman flew to Istanbul, Turkey, on Friday after he decided not to wait to be drafted into the army.

“I don’t know how to put it in mild words, he (Putin) is a war criminal,” he told the Associated Press outside Istanbul international airport.

Mr Putin warned the West earlier this week he would use all the weapons at his disposal and insisted “I am not bluffing” as he addressed Russia for the first time since the invasion of Ukraine on 24 February.

The announcement saw many one-way flights out of Moscow sell out, as the price of remaining tickets soared.

Many are travelling using tourist visas but say they have no intention of returning.

Russian couple Slava, 29, and Evgeniy, 35, left immediately after Mr Putin’s declaration over the uncertainty they could be called to fight in the future.

“At the current stage we are not in demand – but we do not know what is going to happen tomorrow,” Slava said.

“We don’t support what is happening now. We don’t want to be part of it.”

Relatives broke down in tears after the couple made the “difficult decision” to flee, leaving their dog behind with friends.

What is ‘partial mobilisation’?

“We have plans, we have careers. The best scenario is to go back,” Slava told Reuters news agency.

“On the other hand, (saving our) life is essential.”

Meanwhile Russian student, Max, 21, said he was travelling via Finland to visit relatives in Germany.

Speaking from the crossing point at Vaalimaa, where queues are longer than normal, he said: “Technically I’m a student so I should not be afraid of being drafted but we have seen that things are changing very quickly so I assume there is a chance.

“I just wanted to be safe.”

Avoiding the draft is illegal in Russia. But conscripts can defer their service in some cases, including if they’re medically unfit.

And some operators have sought to exploit this by claiming to illegally sell this paperwork – known as a “white ticket” – online for large sums.

One channel named “Buy White Ticket” used an image of the Russian Ministry of Defence’s logo with the words “Not Serve” written over it in Russian.

A post shared on the channel on Friday roughly translates to: “We know you don’t want to go and die.

“But that’s the reality of 2022, so we’ve got a solution for you. Write soon, you’ll get help with your problem.”

The page has over 42,000 subscribers and was created over two years ago. However, it had posted just three times before today, all of them unrelated to the military. This could indicate that the channel may have recently been repurposed.

An earlier advert posted on another channel on Tuesday, as rumours of mobilisation began to circulate, said: “Mobilisation and conscription protection for all ages.

“No matter what age you are, you will never be called up for training or mobilisation. You will simply be forgotten about.”

It is difficult to tell whether the operators posting these adverts do indeed provide the criminal service they purport to offer or are peddling a scam.

The Finnish border agency reported almost 6,500 Russians crossed the eastern land border on Thursday, with heavy traffic building up in the area.

It is more than double the 3,000 arrivals recorded on Monday – as media reports in Finland suggest the government is set to limit access to Russian tourists.

The border agency sought to reassure people saying they “do a thorough check on every arrival” with guards inspecting passports, visa, luggage, cash and cars.

However, the Czech Republic said it would not issue humanitarian visas to Russian citizens.

Foreign minister Jan Lipavsky said: “I understand that Russians are fleeing from ever more desperate decisions by Putin.

“But those running because they don’t want to fulfil a duty imposed by their own government…don’t meet the criteria for humanitarian visa.”

Latvia, Lithuania, Estonia and Poland have also said they would not offer refuge to fleeing Russians.

Meanwhile, religious leaders in Uzbekistan warned people not to get involved in the war because it would go against the Islamic faith.

Russia has offered fast-track citizenship to foreign nationals who agree to fight.

But The Muslim Board of Uzbekistan said “terrorist organisations” were recruiting Muslims for war under the banner of “holy war” or “jihad”.

Muslims are only allowed to sign up for military action if they are defending their homeland and defying this rule could lead to criminal prosecution.