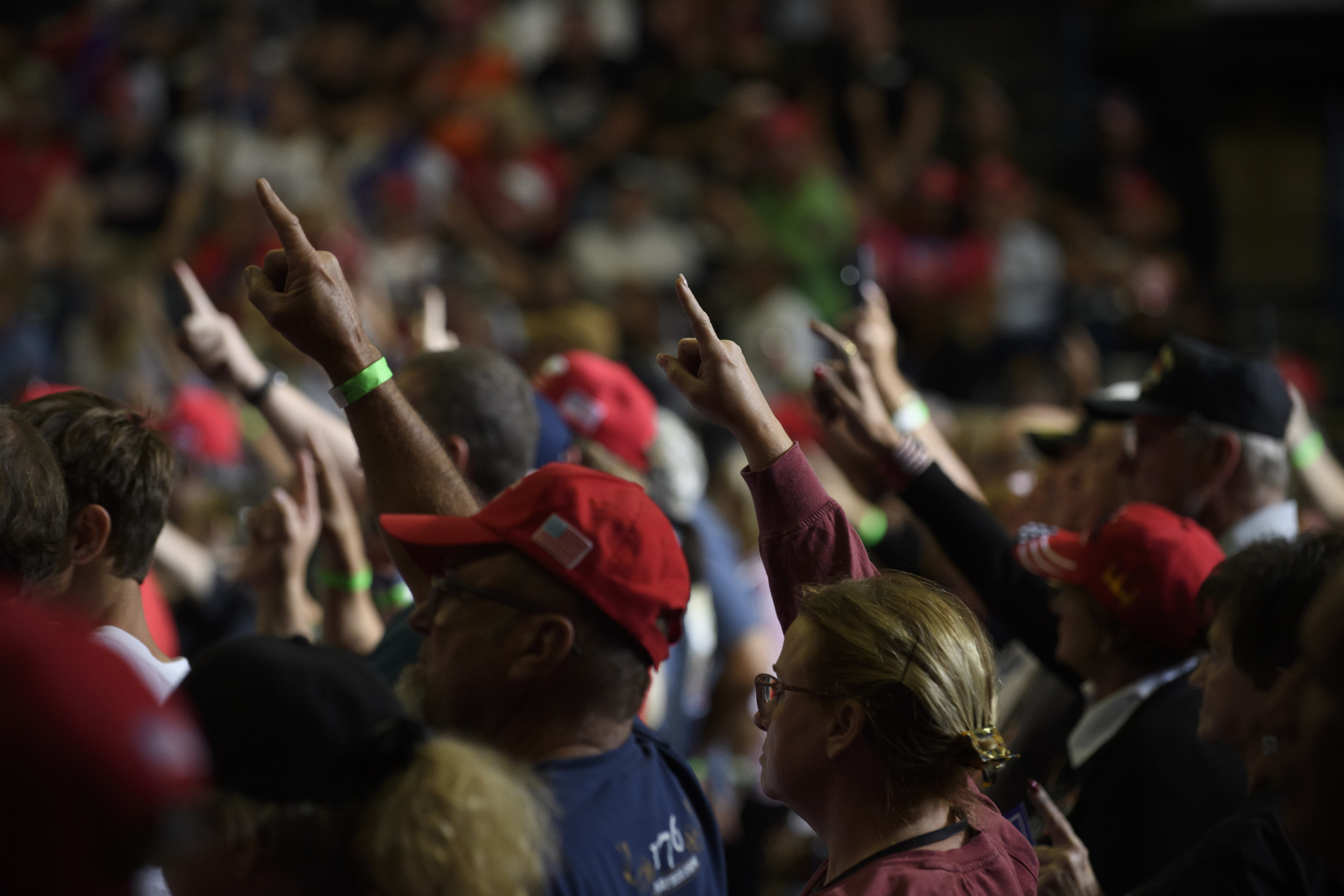 A video taken at former President Donald Trump‘s rally in North Carolina appears to show staff stopping the crowd from making a one-finger salute that has recently become the subject of heavy criticism.

Trump supporters could be seen raising their arms in the air with one finger pointed during the former president’s rally in Wilmington on Friday. A video clip shared to Twitter appeared to show rally staff moving through the crowd and gesturing to supporters to refrain from making the salute as Trump spoke while melodramatic music played in the background.

The salute made its popular debut during a Trump rally in Youngstown, Ohio, last weekend. Some have suggested that the salute is a reference to the “where we go one we go all” motto of the pro-Trump QAnon conspiracy theory.

“When the crowd holds up their fingers again at the Trump rally tonight to give the QAnon sign, security moves through them and has them put it down,” political commentator and former federal prosecutor Ron Filipkowski commented while tweeting the video clip of Friday’s rally.

Others have suggested that the single pointing finger used in the salute could be a reference to the “America First” movement that Trump supports.

However, music that played during the rallies while Trump spoke appears to be identical to the unofficial QAnon theme song “Wwg1wga,” bolstering the plausibility of a connection to the conspiracy theory.

PBS NewsHour correspondent Lisa Desjardins said on Twitter that she had confirmed that the salute was a reference to QAnon and that rally staff had asked the crowd to refrain from saluting, prompting one Trump supporter to become “furious” about the violation of his “constitutional right.”

“Confirmed w people at Trump rally who held 1 finger up that they meant it as a symbol of QAnon’s ‘Where We Go One We Go All,'” Desjardins tweeted. “Security staff here fanned out and told people to take down their fingers. That is a reason why – maybe main reason – we saw fewer.”

“The man in this photo held up 1 finger and told me he meant it as a WWG1WGA sign – and then the security guard in the next photo told him to take it down,” she added while sharing photos of a rally-goer. “He was furious ‘thats my Constitutional right!’ the man in the crowd told me after I saw that interaction happen.”

Comparisons between the Trump rally salutes and historical salutes popular among fascists and Nazis have also been made. During an event in Texas earlier Friday, former Secretary of State Hillary Clinton likened Trump’s rhetoric and style to that of Nazi leader Adolf Hitler.

Clinton compared the “ranting and raving” of Trump and Hitler at rallies and suggested that the former president’s rally attendees were similar to followers of Hitler because they used a salute that involved holding their “arms raised.”

“I remember as a young student trying to figure out, how did people get basically drawn in by Hitler?” Clinton said in Austin. “I’d watch newsreels, and I’d see this guy standing up there ranting and raving and people shouting and raising their arms. I thought what’s happened to these people, why do they believe that?”

“We saw the rally in Ohio the other night,” she continued. “Trump is there ranting and raving for more than an hour. And you have these rows of young men with their arms raised. I thought, what is going on?”

Newsweek has reached out to Trump’s office for comment.