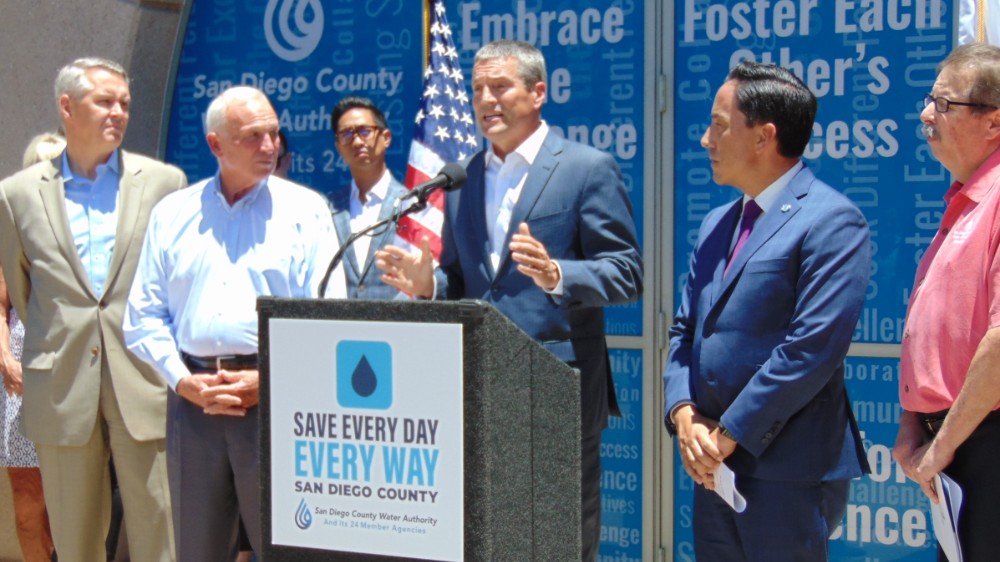 California’s top water official joined local political and business leaders Thursday in calling for more aggressive public efforts to save water amid what may become the worst drought in centuries.

“San Diego is better off than many areas of the state,” he said, but noted that other areas are not so fortunate with the Colorado River reservoirs at just 28% of capacity and Central Valley farmers having to idle fields.

Crowfoot was joined at a press conference by San Diego Mayor Todd Gloria and Chamber of Commerce CEO Jerry Sanders outside the offices of the San Diego County Water Authority.

“Even small actions to cut back on water use, like watering your yard less, can make a lasting impact on the effects of drought in our state,” Crowfoot said.

California has adopted emergency water conservation regulations to ensure substantial savings. Irrigation of non-functional turf in commercial, industrial, and institutional settings is banned statewide, and urban districts have been directed to implement Level 2 of their Water Shortage Contingency Plans.

Gloria said San Diego’s investment in recycled drinking water will enhance supply reliability in years ahead, but he emphasized that it’s important for residents save more water now. “I urge every San Diegan to step up — to do your part,” he said.

Water Authority Board Chair Gary Croucher noted that per-capital water use in San Diego County has declined by 40% over the past three decades, but more saving is possible.

“The simple fact is that we can and should do more. We are committed to answering the Governor’s call to step up conservation efforts this summer,” he said.

Later on Thursday, the Water Authority’s board of directors adopted 2023 water rates that are 3.7% higher for untreated supply and 5.2% for treated water.

Croucher said the agency has taken numerous steps to minimize the rate increases, including drawing on reserve funds.

“The strategic steps taken to minimize rate increases in the face of rising costs reflects the board’s commitment to water affordability,” he said. “We continue to ensure a safe and reliable regional water supply for residents and businesses as California endures a third straight year of drought.”