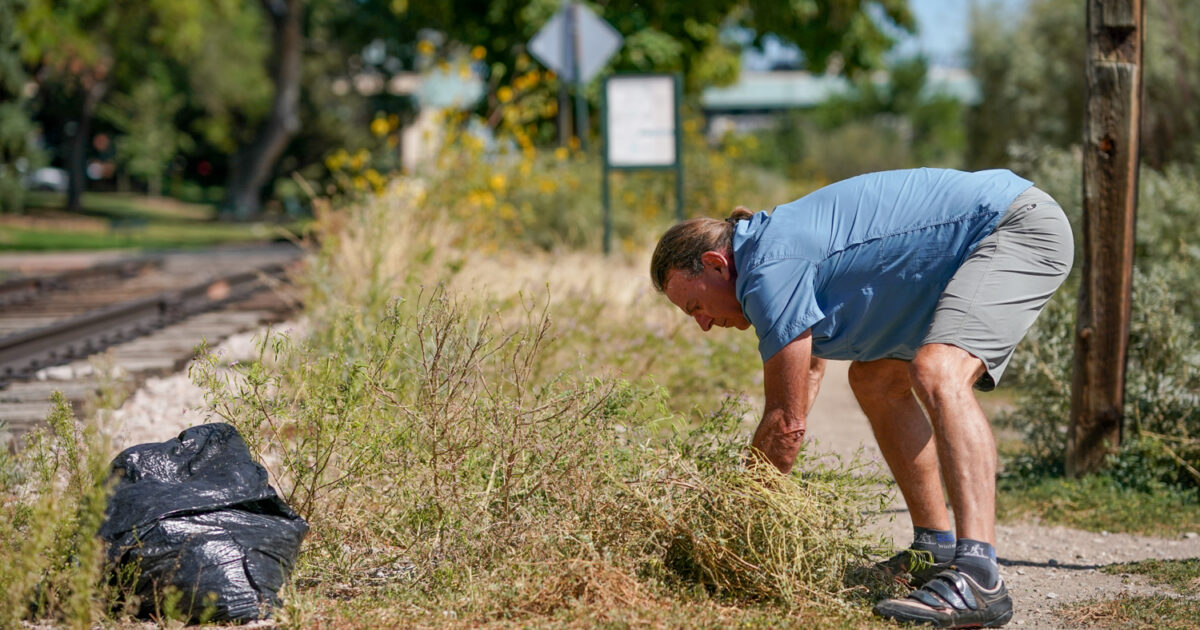 They wonder: What’s going on?

At first, they blame their tires, broken glass, or bad luck. Little do they know, here in the high plains desert, where the soil is dry and rain is rare, a diabolical plant with horned seeds is conspiring to slow them down.

Children and pets step on the thorny pods and cry. Gardeners try to pull these plants up as fast as they grow. The seeds cling to shoe soles and pants cuffs and spread into homes and down sidewalks, birthing plants that stretch across unirrigated soil and crack through concrete.

Here we call these seeds goatheads. And they’re the worst.

The yellow-flowered plant of Mediterranean origin goes by many names. The official one, tribulus terrestris, basically means caltrops of the earth. Caltrops are ancient spiked weapons armies used to jab through the feet of enemies and their horses. More recently eco-saboteurs have used caltrops to pop car tires in defense of the earth, and cartels have used them to stop cops in a chase.

They’re best known for both dramatically ruining cyclists’ attempts at beating fastest-known-time records and adding stress to the mundane for bike commuters late to work.

Some herbalists and foragers argue the plant might have some benefits.

The jury is out on a lot of that.

Mostly, a lot people don’t know about the potential medicinal effects of the plant or how to use it.

One thing’s certain: The delicate yellow flowers are beautiful.

But pretty or not, goathead seeds are an undeniable nuisance, and as Denver tries to convince more people to ditch their cars for e-bikes through the rebate program and pedal to work, goatheads are a legit obstacle covering swaths of bike trails and roads.

There’ one cyclist in Denver, a superhero of sorts, who made it his one-man mission to rid the city’s bike trails of the troublesome tribulus terrestris.

By day, his name is Greg Skomp. But last year, when he transformed into full-blown hero mode, he collected dozens of pounds of the plant at a time.

This year alone, Skomp, who says he’s an “avid cyclist,” has collected 427.5 pounds of puncture vine from Denver’s trails.

He started the practice when he realized that if nobody was clearing the vines, they would only spread.

And boy, can they spread.

“Some of these plants can spread a diameter of six, seven feet,” he said. “So I get the root of it, the head, the crown, and I’ve got this huge thing. I can hold it up in the air and it just touches the ground. And I find it very satisfying that I can pull it all the way out.”

This year’s season has been worst than last, and so he started tallying up his harvests by the pound with a portable scale.

After he weighs them, he puts the plant in a plastic bag and discards it.

Back in August, he had a record day: 80 pounds of puncture vine.

“There’s this big carpet of it,” he said. “I find all these crowns, and I just roll them up and fill a bag in five minutes.”

He’s collected puncture vine along the Sand Creek Greenway, the Highline Canal Trail, the South Platte River Trail, and the Cherry Creek Trail. Some of the worst infestations are around the Fairmount Cemetery.

While some of the groups that oversee these trails have been grateful for his efforts, the City of Denver has been unresponsive when he’s complained about goatheads in the parks, he said.

“They’re all over the city, which is frustrating,” he said. “And the city isn’t that great about enforcing control for noxious weeds. And it hasn’t been declared a noxious weed. So nobody seems to care about this problem, unfortunately.”

Skomp has even found himself pulling up puncture vine around Parks and Recreation buildings.

Denver Parks and Recreation did not respond to requests for comment on this story.

You remember Sisyphus, the guy in Greek mythology who was eternally punished with one task in Hades: pushing a boulder up a hill, only to have it roll back again? Sometimes Skomp feels that way, but mostly, his efforts are paying off.

When Skomp started uprooting puncture vine form the section of the Highline Canal near Fairmount Park, he thought it would take a couple of days. He’s been at it for at least five and acknowledges he’s still on his first round.

“It’s gonna take more than one year,” he said. “The seeds can last for three years. I just haven’t been able to get in there to get them cleaned up before they could drop their seeds again. You know, unfortunately, some of the areas where we have already been, we’ve seen a lot of sprouts coming up. But you know, I’m doing the best I can for now.”

In the meantime, there are things cyclists can do to protect themselves.

Get tubeless wheels or goo-filled tubes, which can make things heavier and slower but not as slow as taking care of a roadside patch.

He also recommends people check their tires before riding and after stops.

Cyclists shouldn’t roll over plants with yellow flowers. And if they set their bike in the dirt, just make sure no goatheads are around.

At home, cyclists should check shoes and pants for goatheads, so they don’t bring them indoors.

Finally, he encouraged people to cart along gloves and a plastic bag and uproot these plants whenever possible.

His task, after all, is daunting — but worth it.

As he rides by sections he has cleared in the past, he’s happy to see they are mostly not infested. The work, in general, is paying off.

But there’s still a ton to do.

His wife tells him he needs to get help from the community. He can’t continue to take on every goathead alone. And he agrees getting some help is a good idea.

“I’d like to find a way to get other people out there and do some collecting,” he said. “Goatheads are just really nasty for bicycling.”