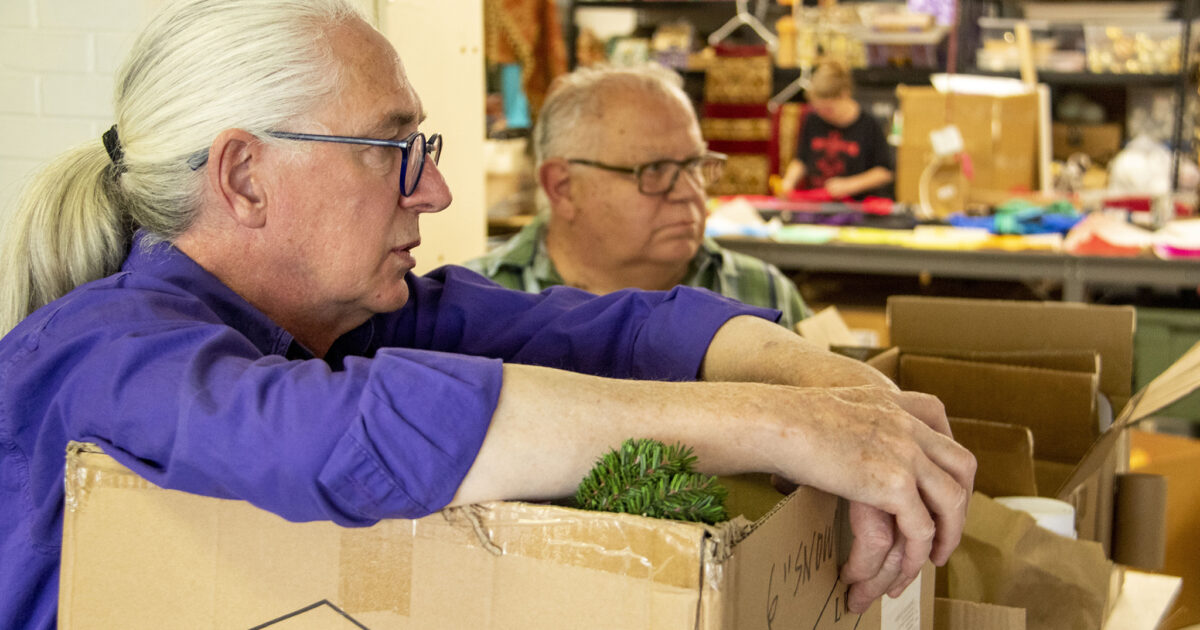 Every year at Denver PrideFest, local artist Lonnie Hanzon puts together a massive temporary art installation with a team of collaborators and volunteers. The pieces act as a sort of colorful centerpiece for the event and tend to engage with both the given theme for each year’s Pride and current events relevant to the LGBTQ+ community.

The theme for this year’s PrideFest — the first fully in-person Pride celebration in Denver since the pandemic began — is “Together with Pride,” emphasizing the significance of Denver’s LGBTQ+ community being able to celebrate together in person since before the pandemic.

“I think that’s the whole point of Pride anyway, is trying to bring people together. All people, all humans, all sentient beings,” Hanzon said. “Because there’s enough in the world that tries to tear us apart. And so if nothing more, it’ll be great to see so many people gathering again.”

Going into this event, Hanzon’s team contemplated how to build a celebratory piece and spread positivity after the challenges of these last few years.

“When we started listing the disasters of the world, it’s a pretty long list,” Hanzon said. “We’re in a time of incredible division, and there’s problems from every angle that we’re trying to get past. And so, how do you celebrate that?”

Since the last in-person Pride in 2019, the country has lost over a million people to COVID-19. There was an insurrection at the U.S. Capitol, clashes over racism, gun violence, and the increasing threat of climate change.

“There’s no doubt in my mind that we’re at a time of sea change, which means these huge waves of change are just crashing,” Hanzon said. “And right now, we’re right in the middle of all of that, and all the radical stuff will become eddies and spin off. But it’s a very, very painful period that we’re going through.”

Hanzon said the initial idea for this year’s art installation was a sort of world-on-fire, scorched earth framework.

“And then, as we try to rebuild a world that is so divided, what world do we want to build?” Hanzon said.

This year’s PrideFest installation is called “Gather, Together, In Pride.”

Construction on the temporary installation begins Friday, June 24. Hanzon said his team expects to finish the piece sometime on Saturday. It will be taken down at the end of PrideFest, on Sunday.

“These things are always like doing massive improv because it only goes up for a day and a half,” Hanzon said. “It’s like staging a parade. You don’t really know what’s going to happen.”

First, the team will construct the piece’s steel framework. At the center of the piece will stand the frame of a 450-square-foot steel globe, almost like a geodesic dome, designed by technical director David Darling. Around the globe, the team will set up twenty 28-foot fiberglass poles typically used for Japanese carp kites, all arched toward the center of the installation above the globe, reaching toward one another but not quite meeting. The team plans to weigh down the structure with recycled 250-gallon tanks, which previously had been used to transport corn syrup.

Throughout the weekend, volunteers will come together to build upon the bare steel structure, embellishing it with thousands of pieces of recycled fabric. They’ll fill the frame of the globe with colorful silk flowers to evoke a sense of gathering together in this imagined new world. Community members will be invited to tie silk ribbons to the poles, which will eventually be hung with unfurling rainbow flags.

Hanzon said he doesn’t expect everyone to engage too deeply in the piece’s symbolism. His hope is that people find the piece to be joyous, welcoming, colorful and celebratory.

“We need a celebration. I think that’s really what it was about,” he said. “I don’t want to deny that the world is a sorrowful place. But we’re doomed if we can’t figure out a way to participate joyfully in that.

“I hope everybody’s healthy and happy. And that we can enjoy a collective exhale. And that people will continue to commit themselves to unifying for a better world,” Hanzon continued. “That’s why we do all this, is to try to get people — these little ants on this big planet — to understand that we’re all the same. We’re all humans just trying to get through it like everybody else. And that we’re a lot stronger together than apart.”