There’s a new addition in one of Denver’s most popular neighborhoods for eating and drinking: This Is a Waffle Truck is the result of a joint effort between the Block Distilling Co. and Bryan Smith, the chef behind Black and Delicate Baking. It’s now permanently parked in front of The Block’s tasting room at 2990 Larimer Street.

Smith’s path to running a waffle-centric food truck is winding. Originally from the East Coast, he attended high school in Colorado Springs and later enrolled at the University of Colorado Denver to study graphic design and video production. Like many young people attending college, Smith struggled financially and just needed a job. “In 2014, I was super broke and I got a job washing dishes at Green Fun Salad,” he says. “It’s been closed for a long time, but I worked there for about two and half years and that’s how I got involved with food.”

Although Smith lacked formal culinary training, he was confident in his ability to cook shrimp. “One day, I saw my GM destroying some shrimp in the worst way possible,” he recalls. “So, I was like, ‘Hey, you know if you want, I can wash dishes and I can also cook this one pan of shrimp.'” After that, his GM pulled him from the dish pit and placed him on the cold line — it was Smith’s first experience preparing food for guests. “I wasn’t doing the live, hot cooking, but I was mixing salads and tasting things and making vinaigrettes,” he explains.

But soon after, the owners decided to close the restaurant and Smith was laid off. He began doing freelance graphic/video production work, “But honestly, I just couldn’t make ends meet,” he admits. “And the more time I spent in the kitchen, I realized this might be something that I can look at as a craft and not just a side hobby.” In early 2017, Smith landed a job at Bacon Social House in Sunnyside. “That was the first time I did an actual hotline, to-order cooking, and I got my ass kicked for the first six months or so,” he remembers. “I got to the point of almost quitting. I was like, ‘Oh man, I don’t think I can do this.’ But, I kept at it.”

Pretzels are one of the items Smith bakes for Black and Delicate.

It was at his next job, at Satchel’s on 6th, where Smith developed a passion for baking, a skill that most of the line cooks he worked with didn’t have. “It could have been something as simple as, ‘We need you to make a batch of a dozen cookies,’ and that’s a project that kept getting pushed off to the side. And I thought to myself, maybe if I diversify myself in this way and learn how to bake, then maybe I can get hired for more jobs,” Smith explains.

After a year at Satchel’s, Smith decided to learn all be could about baking. He bought cook books and started experimenting with new recipes. He went back to Bacon Social House in 2019 to help open its Littleton location, and often baked treats for co-workers. “When I left [Bacon Social House], I told myself that the next thing I do, I really really want baking or some kind of dough making to be involved,” Smith says.

The pandemic hit shortly after, putting Smith’s plans on hold, until he landed a gig at Dio Mio, the fast casual pasta-focused eatery in RiNo. “It was interesting to be involved in a restaurant trying to come out of the depths of the pandemic,” he recalls. “I just learned so many cool things about pasta there. I learned about dough making in a way that I unfamiliar with completely. And I got to exercise some of my bread making there,” Smith says.

He also kept bringing in baked good for co-workers. Dio Mio owners Spencer White and Alex Figura eventually asked Smith whether he’d ever thought about selling his baked goods. “And immediately, I was like, absolutely not. No. All I got is my home kitchen,” he says. “There are a million reasons not to do something, and sometimes you just need a reason to do it.”

When White and Figura offered Smith a 50 pound bag of flour for $70 to get started, he jumped at the opportunity, which ultimately led to him launching Black and Delicate Baking in 2020. 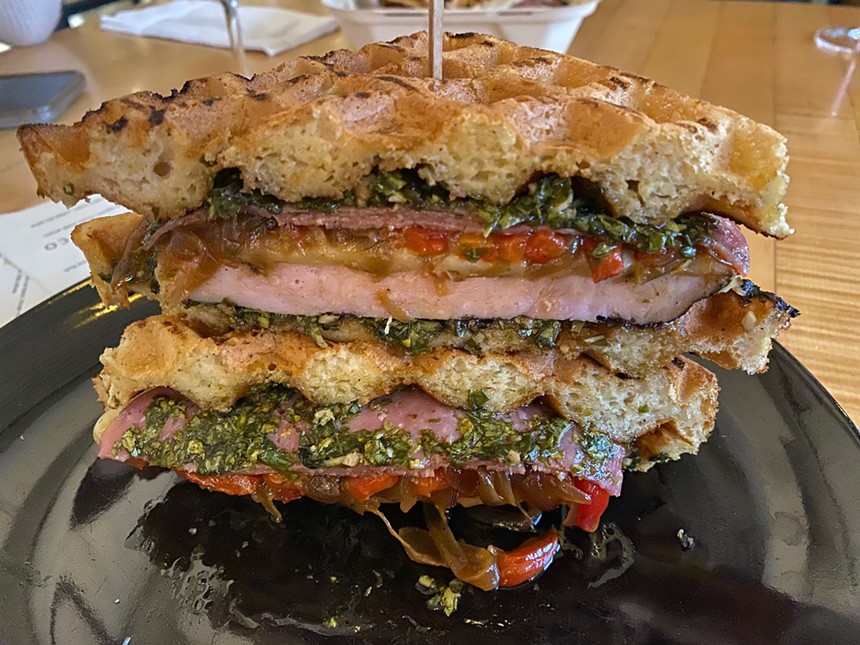 The Grinder from This Is a Waffle Truck.

He ran the baking company while also helping White and Figura open Redeemer Pizza. “I was the dough guy down there for a year at Reedemer, from opening day until my last day on August 16” Smith says. “That was a really cool opportunity. The only opportunity so far where I specifically and solely made bread, pizza, and baked goods. [Spencer and Alex] saw my passion and really supported me a lot. They let me use the entire kitchen to do my own pop ups out of the back of Redeemer at the slice window.”

While working at Redeemer, Smith met Kraig Weaver, co-owner the nearby Block Distilling Co., who reached out to Smith in July with a proposal. “It was actually their idea to do waffle sandwiches [on the truck],” Smith says. “I really just came in and put a little bit of my own nostalgia on the menu. And it’s my first time in a head chef position. They really gave me free rein and trusted me to put together a menu that we all think is going to be great.”

Smith’s baking abilities have inspired his take on waffles. “In most of my baking, I try to do naturally leavened sourdough baking,” he explains. “So our waffle is a 50 percent whole wheat waffle, and it’s naturally fermented anywhere from 24 to 48 hours in advance. A little bready, a little sour, but it’s still light and fluffy and crispy. It’s designed to be for a sandwich.” 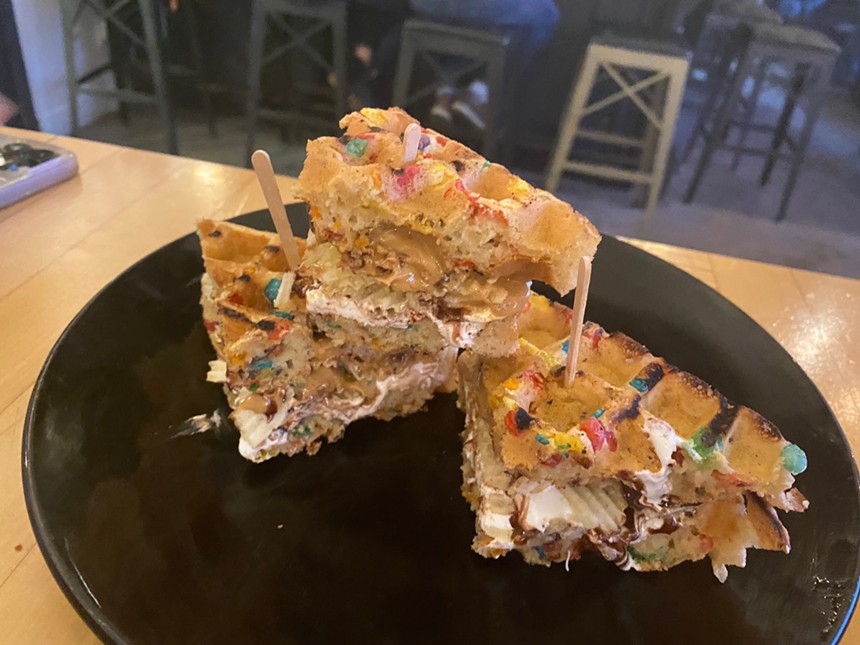 From a fried chicken waffle sandwich drizzled with black cardamom hot honey to a Fluffernutter sandwich served on a fruity pebbles sourdough waffle with peanut butter, Marshmallow Fluff, Ruffles potato chips and chocolate ganache, the menu if filled with fun and creative bites. “If I had to pick one that is just like the ultimate banger and isn’t ever going to disappoint you, it’s the Italian Grinder,” Smith says. “It’s a thick cut ham steak with Genoa salami, roasted red peppers, caramelized onions, pepper jack cheese and house made Italian herb olive oil. Something about it just really sings when you eat it. It’s fucking money.”

The truck also offers a veggie sandwich with fried green tomatoes and pimento cheese among other options. “It’s gonna be a blast,” Smith says of running the new venture. “Everything is going to be bursting with flavor. I want people to know that the food is made with a lot of passion by people who are excited to be here every single day.”

This Is a Waffle Truck is located outside of the Block Distilling Co. at 2990 Larimer Street and is open 4 to 10 pm. Thursday, 3 to 11 p.m. Friday, 1 to 11 p.m. Saturday and 1 to 9 p.m. Sunday. For more information, visit instagram.com/thisisawaffletruck.