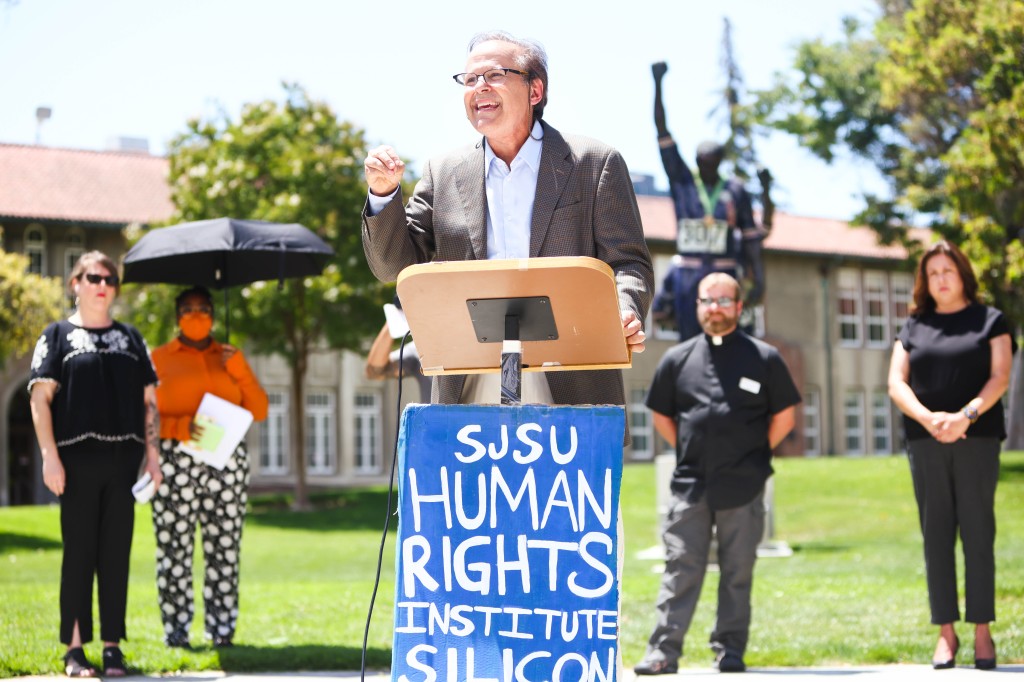 For three years now, the San Jose State professor Scott Myers-Lipton has held a mirror to Silicon Valley’s staggering wealth divide, and reflected the disparities: Less than 1% of the Valley’s households account for 25% of the region’s bountiful wealth, while more than 45% of the Valley’s children live in households that cannot cover basic needs.

The wealth gap between White households and Black and Latino communities is widening at an unprecedented rate, according to the third annual Silicon Valley Pain Index released Wednesday, and the trends shows no signs of slowing down anytime soon.

The income disparity is part and parcel of what Myers-Lipton sees as an environment of “devastating inequality” across racial lines.

“Here in Silicon Valley, this is one of the ways our racism plays out,” Myers-Lipton said. “Clearly, African Americans and Latinx communities are not partaking in the astronomical amount of wealth being created here.”

While Silicon Valley tech giants have reported record revenues in the past year and White worker incomes have continued to rise, the average family income for Black and Latinx workers in Silicon Valley is falling, leading to homeless rates of more than 11% within their respective communities.

Myers-Lipton, a professor of sociology at San Jose State University and an advisory board member for the university’s Human Rights Institute, launched the annual report in 2020 after the murder of George Floyd raised awareness of pervasive racial inequalities across the country. The goal: Make the economic divisions so clear that policymakers and state officials have no choice but to take action.

The tactic is slowly making an impact — inspired by the 2021 report, California State Sen. Dave Cortese is spearheading legislation that would provide a guaranteed income of $1,000 per month for five months to graduating high school seniors experiencing housing insecurity. But while the initiative is a step in the right direction, one bill is not enough, according to Myers-Lipton.

“We’re calling for real action from Silicon Valley tech leaders and from our elected officials, those who are in positions of power to make change,” Myers-Lipton said.

This year’s report puts a spotlight on 89 statistics that cover a broad spectrum of issues, from food insecurity across Santa Clara County, to housing inequality, to the stark lack of Black and Latino representation in leadership at the Valley’s largest tech companies. At Apple, the pain index reports, not a single one of the 126 executives and senior managers is a Black, Pacific Islander/Hawaiian or American Indian/Alaskan Native man.

Now, Silicon Valley’s marginalized communities are feeling the impacts of this top-level disparity downstream. Corina Herrera-Loera, who works as a trustee for the Alum Rock Union Elementary School District, said that her public schools have started providing free meals to anyone under 18 who needs it after observing the growing food insecurity experienced by children in the area.

“We shouldn’t be having to do that,” Herrera-Loera said. “We’re happy to do it and make sure we cover that need, but our children shouldn’t be going to sleep hungry and waiting until they can get breakfast from our school … Enough is enough.”

For Cynthia Ouandji, an engineer and comedian representing the Black Leadership Kitchen Cabinet, a coalition of community-based groups working to support the Santa Clara County African American population, it is becoming increasingly difficult to recognize the city she grew up in. Over the past two years, Ouandji said, many of her colleagues and neighbors have had to move out of San Jose in hopes of finding more affordable options in the Bay Area.

“San Jose is home to me,” Ouandji said. “However, every year San Jose becomes a place that is less and less for the working class, for BIPOC people,” she said, referring to Black, Indigenous and people of color, “for artists and even engineers like me.”

Ultimately, Myers-Lipton said, the problem starts with housing. As median rents rise across the nation, the Bay Area leads the pack — today, the San Jose-Sunnyvale-Santa Clara region is one of the most expensive metro areas to rent in the United States, according to the report. Silicon Valley’s Black and Latino communities have felt the reverberations of the housing crisis, as a lack of affordable options have led to displacement, rising poverty and homelessness, and educational inequities between lower and higher-income school districts.

Along with rising poverty and displacement has come rising mortality rates. In 2021, 250 homeless people died on the streets of Santa Clara County, a 55% rise from pre-pandemic levels.

Amid worsening housing insecurity, policymakers have continued to drag their feet despite committing to lofty goals, Myers-Lipton said. In 2017, San Jose Mayor Sam Liccardo outlined a housing plan with the objective of building 10,000 affordable housing units by 2022.

Five years later, the Pain Index shows that the city is 8,372 units short of the target after building only 204 affordable units since July 2021, down 417 from the previous year. For real progress to take hold, Myers-Lipton said, it will take a group commitment, both from policymakers and tech industry leaders.

“We don’t want to be here in 10 years, discussing these persistent racial and social inequalities that exist in Silicon Valley,” Myers-Lipton said. “Our hope is that in 10 years, we’ll be reporting on the numerous solutions that have been proposed to end these racial inequalities and how we’ve moved to more equality.”