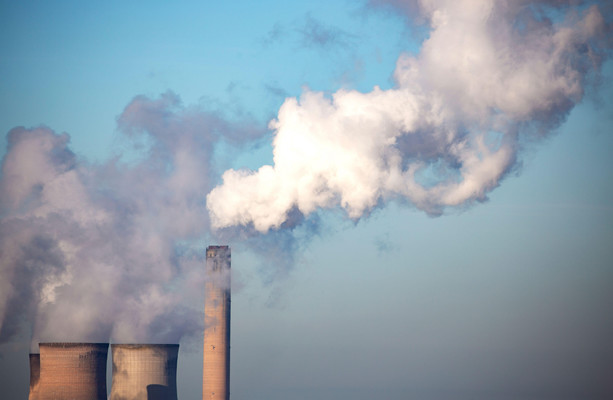 Lauren Boland reports from the European Parliament in Brussels

Several chunks of Fit for 55, the EU’s plan to cut greenhouse gas emissions, did not pass through the Parliament earlier this month when MEPs were divided on whether a specific reform went far enough to be valuable.

Voting on the emissions trading system, which puts a cap on the amount of greenhouse gases that can be emitted by factories, power plants and aviation, took an unexpected turn as Left MEPs decided they could not vote in favour of reform they described as having been watered-down from its original ambition.

After returning the legislation to the EU’s environment committee, MEPs voted in favour this week of a version that slightly upped the target, putting through a measure that some view as still not yet reaching its full potential but which allows the momentum on climate action to continue.

Speaking to The Journal, Green MEP Ciarán Cuffe described it as “progress” but added it is “nowhere near what we need”.

439 MEPs voted in favour of the revised ETS, with 157 against and 32 abstentions.

Most of the votes against the proposal were from right and far-right politicians in the European Conservatives and Reformists group and the Identity and Democracy group, but some Left MEPs remained opposed, including Ireland’s Clare Daly and Mick Wallace.

Sinn Féin’s Chris MacManus abstained, while the other 10 Irish MEPs voted in favour.
Within the emissions trading system’s cap, which decreases each year, companies can buy and trade emission ‘allowances’.

How far the EU will reduce those emissions has been the source of contention, with a proposed target moving from 67% to 61% and now being agreed upon at 63%.

The Parliament also approved a new trading system for buildings and road transport with citizens excluded until 2029.

Cuffe said that although the final agreement was an improvement on the version that was voted down earlier this month, the EU still needs to go further to play its part in fighting the global climate crisis.

“As my colleague Bas Eickhout, the Green-EFA MEP from the Netherlands, said, this may be For for 55 but it’s not fit for 1.5,” Cuffe said, referencing the important goal set out by the Paris agreement of trying to keep global warming below 1.5 degrees Celsius.

“What he meant by that is, yes, it’s in line with what the European Commission promised us a year ago, but it won’t necessarily keep our emissions down to a 1.5 degree maximum of warming,” he said.

“That is a real concern. We said when the European Climate Law was being passed a year ago we actually need to ramp down 65% by 2030, not 55%.

It’s not as far as we want to go. In Ireland, we have the Irish Climate Law which promises a 50% reduction in emissions by 2030, so both at an Irish level and at a European level, we need to be quite ambitious.

“Hindsight’s a wonderful thing but when we were in government 11 years ago, we were talking about 3% annual reductions in greenhouse gas emissions. Had we approved legislation then, it would be a less onerous task.”

The resistance from the Greens to the initial ETS vote caught the ire of centrist parties like the European People’s Party (where Fine Gael sits) and Renew Europe (Fianna Fáil), who argued that it unnecessarily held up progress on the package.

Speaking to The Journal, EPP MEP Deirdre Clune said the grouping “wanted to give breathing space to industry”.

“We weren’t going to cut the targets or interfere with the targets to 2030 but what we wanted to do was make sure where we are now, in a period of certainty regarding supply chain issues for industry, energy costs, all of those insecurities, we wanted to give them space,” Clune said.

“It won’t ramp up so quickly now but at the same time it will get there to the reductions that are required,” she said.

She said the EPP’s position was criticised by the right for going ‘too far’ and by the left for not going ‘far enough’.

“Two weeks ago, we were told as an EPP group that we were turning our back on the Paris climate agreement.

We weren’t. We were committed to the target but we had a different approach.

“Now the vote that was accepted, actually, I don’t see much difference. There’s a year here, the curve has been increased slightly, but at the same time, it’s the same principles.

On whether the system – which, along with the rest of the Fit for 55 package, has been in train for many months – can now stand up amid the chaos caused by Russia’s war on Ukraine, Clune said: “I think it is fit for purpose. I think what we’ve done we’ve given that breathing space for the next few years because we are in a crisis.”

“They provide jobs, services, and valuable products that we all depend on. What we have is a balance at the beginning but we are going to get to the 2030 targets and 2050 targets if these measures are implemented.”

With some measures under the Fit for 55 package now passed through Parliament, others remain to be progressed as committees work through legislation.

Areas such as energy, fuels, forestry, land use, aviation and transport have been targeted under the package, including a directive on buildings’ energy performance aimed at reducing emissions from buildings and improving their energy efficiency.

Cuffee, the rapporteur on the directive, outlined that a key target is to get every building in Europe to an A-energy rating by 2050, but that first member states will need to come on board with performance standards.

“We want to ensure that every EU member state has minimum energy performance standards and that there will be requirements to move gradually up that scale as the years go by, not only in property that is owned but in rental property as well,” he said.

No news is bad news
Support The Journal


“We’re also creating a new category of A plus building that creates more energy than it consumes.

“Buildings consume 40% of Europe’s energy and are responsible for 36% of greenhouse gas emissions, so anything we do to improve the energy performance of buildings will really make a difference to meeting our climate targets.”

On energy, the EU has decided today to remain in the Energy Charter Treaty after multiple rounds of talks despite a loud call from Spain and some activists to exit the treaty over a lax approach to fossil fuel companies.

A provisional deal on the treaty will allow the EU and UK a loophole to avoid needing to pay out companies for losses incurred by climate measures, but only applies to current investments in ten years’ time.

There was some political pressure on the issue in Ireland with Green TD Patrick Costello raising it in the Dáil yesterday, while Sinn Féin Senator Lynn Boylan called on Minister for Climate Eamon Ryan to follow Spain by demanding the EU leave the treaty.

Boylan said the treaty’s protections for investors were making the transition to renewable energy “much more expensive because, on top of shifting our society and our economy away from fossil fuels, citizens – through their governments – will also have to compensate fossil fuel investors to stop damaging the climate”.

“The Energy Charter Treaty is a relic of a fossil fuel past. It is time to face up to the reality that the ECT is beyond reform,” the senator said.