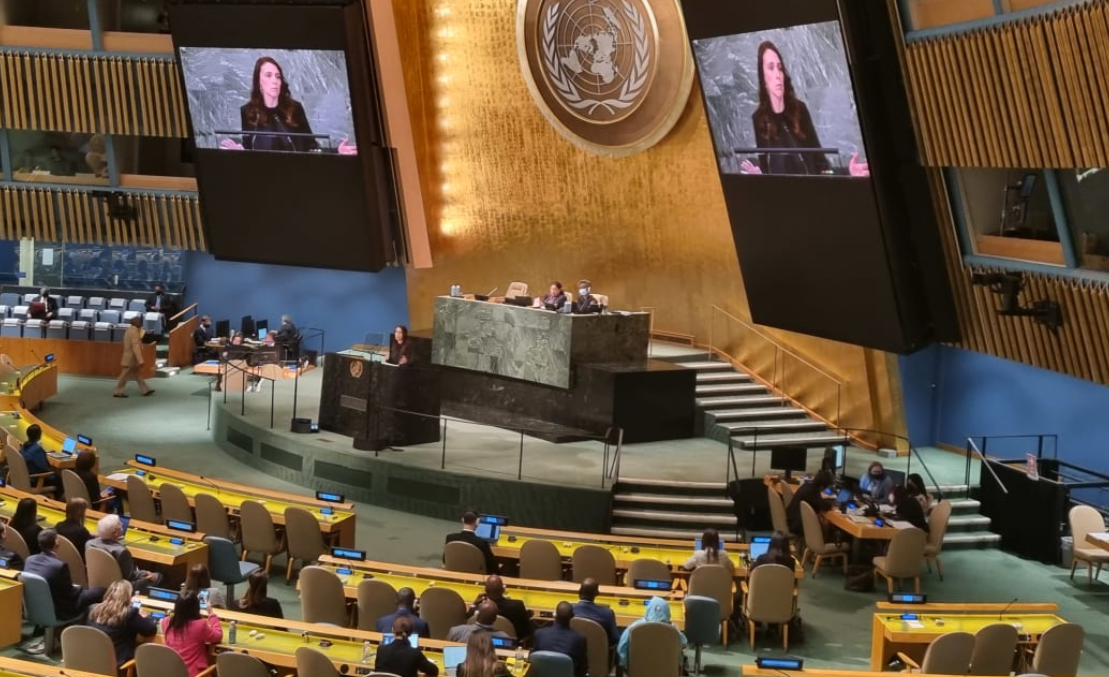 Just days after the Kremlin threatened nuclear warfare, Jacinda Ardern has taken to the United Nations podium to condemn Russia and call for a complete ban on all nuclear weapons.

The New Zealand Prime Minister also used her to speech to demand UN reform, saying it risked irrelevancy unless it abolished the veto held by Security Council permanent members.

Ardern addressed the general assembly on Saturday at 5am (NZ time) after a week where Russia’s invasion of Ukraine has dominated affairs.

“Let us all be clear: Russia’s war is illegal. It is immoral,” she said.

“It is a direct attack on the UN Charter and the international rules-based system and everything that this community should stand for.”

Ardern told the audience Russian president Vladimir Putin’s recent rhetoric proved his war was “based on a lie”.

“What country who claims to be a liberator, threatens to annihilate the very civilians they claim to liberate?”

In August, Ardern penned a rare opinion column for The Guardian in which she called for nations “to step back from the nuclear abyss”.

She reiterated her call on Saturday, saying the only way to guarantee safety from “the catastrophic humanitarian consequences of nuclear weapons” was for them not to exist.

“In New Zealand, we have never accepted the wisdom of mutually assured destruction.

“It takes one country to believe that their cause is nobler, their might stronger, their people more willing to be sacrificed.

“None of us can stand on this platform and turn a blind eye to the fact that there are already leaders amongst us who believe this.”

New Zealand would not be dissuaded by the “backwards step” where Russia blocked progress on the Nuclear Non-Proliferation Treaty, she said.

Ardern said the Security Council had failed to act in the defence of global peace and security in March when Russia used its veto power to block a resolution to end the war.

“[The Council] did not fulfil its mandate because of one permanent member who was willing to abuse its privileged position.”

She said the institution needed modernisation fit for the current “tumultuous waters”.

“For the United Nations to maintain its relevancy, and ensure that it truly is the voice of the breadth of countries it represents, the veto must be abolished and Permanent Members must exercise their responsibility for the benefit of international peace and security, rather than the pursuit of national interest.”

The Prime Minister broadened her critique beyond just nuclear weapons to also warn leaders against underestimating one of the new weapons of war: “prolific disinformation”.

“How do you successfully end a war if people are led to believe the reason for its existence is not only legal but noble? How do you tackle climate change if people do not believe it exists?”

She encouraged countries to join the Christchurch Call – a commitment to eliminate extremist content online, following deadly terror attacks on two mosques in the city – spearheaded by New Zealand and France.

Ardern arrives back in Wellington on Monday.