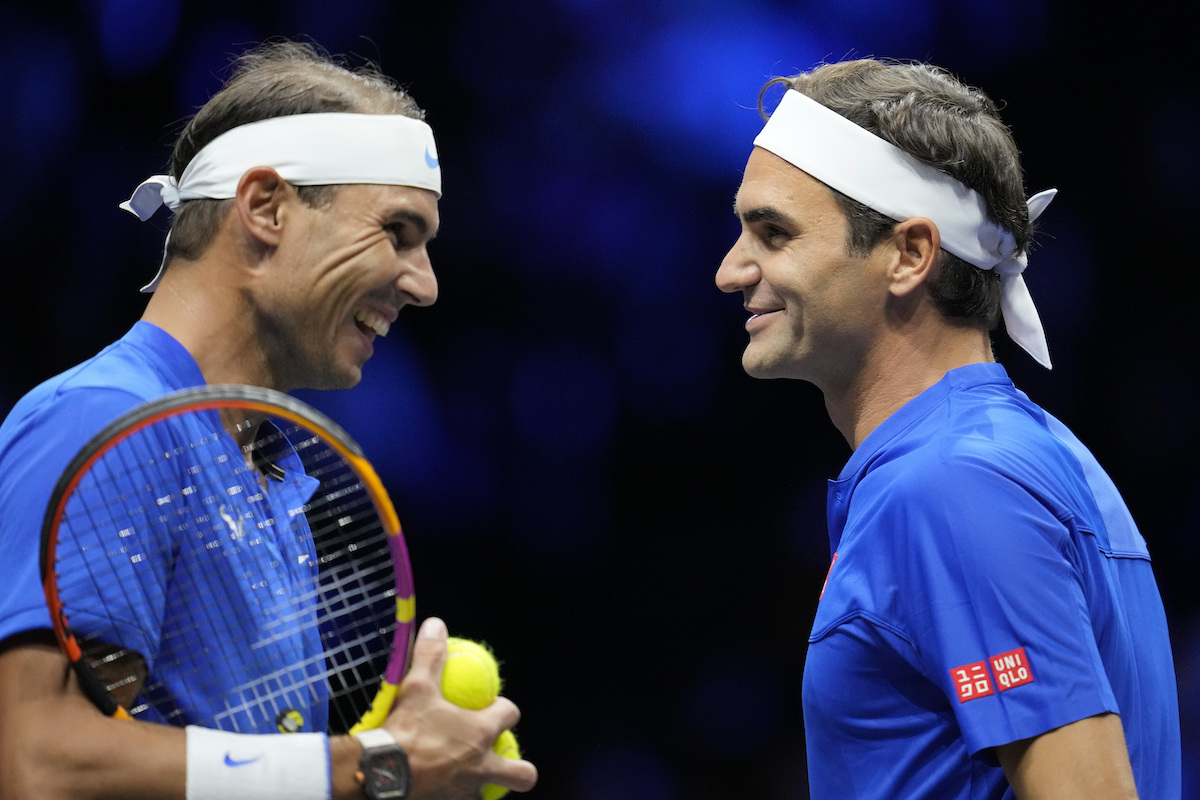 When the match, and with it, his time in professional tennis, ended, Federer hugged Nadal, then Tiafoe and Sock. And then Federer began crying. As cascades of clapping and yells of affection came from the stands, Federer put his hands on his hips, his chest heaving. Then he mouthed, “Thank you,” while applauding right back toward the spectators who had chanted, “Let’s go, Roger! Let’s go!” during the concluding moments of a match that lasted more than two hours and ended at about 12:30 a.m.

The Swiss star announced last week that the three-day team event, which was founded by his management company, would be his final event before retirement, then made clear the doubles outing would be his last match. His surgically repaired right knee — the last of three operations came shortly after a loss in the Wimbledon quarterfinals in July 2021, which will go down as his final official singles match — is in no shape to allow him to continue.

“For me, just personally, (it was) sad in the first moment, when I came to the conclusion it’s the best decision,” Federer said in an interview with The Associated Press this week about his emotions when realizing it was time to go. “I kind of held it in at first, then fought it off. But I could feel the pain.”

A couple of hours before Friday’s match, Federer tweeted: “I’ve done this thousands of times, but this one feels different. Thank you to everybody who’s coming tonight.”

He had said he wanted this to feel more like a party than a funeral, and the crowd obliged, rising for a loud and lengthy standing ovation when Federer and Nadal — each wearing a white bandanna, blue shirt and white shorts — emerged together from a tunnel leading out to the black court for the last match on Day 1 at the O2 Arena. The spectators remained on their feet for nearly 10 minutes, through the pre-match warmup, holding aloft phone cameras to capture the moment.

They came ready to roar for him, some with Swiss flags, some with homemade signs, and they made themselves heard with a wall of sound when Federer delivered a forehand volley winner on the match’s second point. Similar reactions arrived merely at the chair umpire’s announcement before the third game of “Roger Federer to serve,” and again when he closed that game with a 117 mph service winner.

Doubles requires far less movement and court coverage, of course, so the stress on his knee was limited Friday. Federer showed touches of his old flair, to be sure, and of rust, as to be expected.

As his parents and wife sat in front-row seats behind a baseline, there were a couple of early forehands that sailed several feet too long. There also was a forehand that slid right between Sock and Tiafoe and seemed too good to be true — and, it turned out, was: The ball traveled through a gap below the net tape and so the point was taken away from Federer and Nadal.

Although it amounted to, essentially, a glorified exhibition, all four doubles participants played as if they wanted to win. That was clear when Sock leaped and screamed after one particularly terrific volley or when Tiafoe sent a couple of shots right at Federer and Nadal.

But the circumstances did allow for moments of levity.

Federer and Nadal were able to laugh after a bit of confusion over which should go for a ball on a point they lost. After Nadal somehow flicked one back-to-the-net shot around the post, only for it to land barely wide, Tiafoe crossed over to extend a hand with congratulations for the effort.

In the first set, the two greats of the game couldn’t quite hear each other between points, so Federer trotted from the net back to the baseline to consult with Nadal, then pointed to his ear to signal to the fans what the issue was.

Before Federer, the men’s mark for most major tennis championships was 14 by Pete Sampras. Federer blew past that, accumulating eight at Wimbledon, six at the Australian Open, five at the U.S. Open and one at the French Open, setting a new standard that Nadal, now with 22, and Novak Djokovic, with 21, equaled, then surpassed, as part of a golden era for the sport.

Federer’s substantial resume includes 310 weeks at No. 1 in the ATP rankings, a Davis Cup title and Olympic medals. Beyond the elegance and effectiveness while wielding a racket, his persona made Federer an ambassador for tennis, someone whose immense popularity helped attract fans.