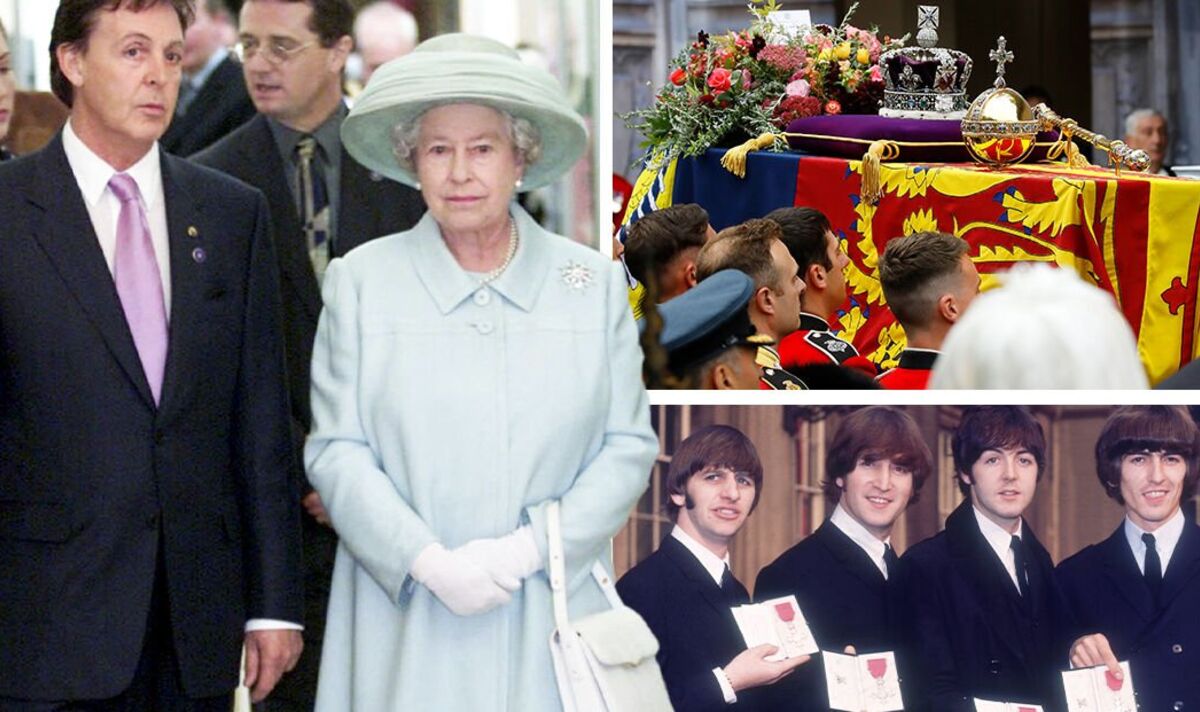 Queen Elizabeth II has bee revealed as a big fan of The Beatles who expressed deep concern at the attack on George Harrison in his own home in 1999, a German ex-MEP who knew the legendary band himself from their days in Hamburg has revealed. Hans-Olaf Henkel recounted his remarkable tale after the Queen’s spectacular funeral on Monday, watched by an estimated worldwide audience of more than four billion.

Mr Henkel, who stepped down from the European Parliament in 2019, explained he used to date photographer Astrid Kirchherr, subsequently the girlfriend of one-time Beatles bass player Stuart Sutcliffe.

In 1961, when he was aged just 21, the pair subsequently took him to the world-famous Reeperbahn, where he was introduced to John Lennon, Paul McCartney and George Harrison – but not yet Ringo Starr, with Pete Best still the group’s drummer.

Fast-forwarding almost 40 years, Mr Henkel, now aged 82, continued: “It was in 2000 that the Queen came to Berlin to officially open the new British Embassy in Berlin.

“At that time I was President of the Federation of German Industries (BDI), roughly the equivalent of the British CBI.

“Much to my surprise the British Ambassador to Germany, Sir Paul Lever, invited my wife and me to a dinner in honour of the Queen at his residence at Berlin-Grunewald.”

Upon arrival Mr Henkel said he had counted no more than 12 other invitees plus The Queen and Prince Philip, whom he hosted in 1998 when he came to represent Britain at the Hanover Industrial Fair.

JUST IN: Meghan Markle ‘couldn’t believe she wasn’t getting paid on walkabout’

“We had a delightful conversation about the group. She was not only totally well informed about Hamburg’s role in the Beatles’ career, she also told us herself how much she liked their music.

“Not only that, she described herself in a rather precise way about an attack by a burglar on The Beatles’ lead guitarist George Harrison at his residence, who according to her suffered serious injuries.

“She described the event with a lot of sympathy on one hand and with quite a precision on the other.”

Mr Henkel had previously been unaware of the attack, during which Harrison was stabbed by Michael Abram, a 34-year-old man diagnosed with paranoid schizophrenia who broke into the musician’s home in Friar Park, Henley-on-Thames.

He admitted: “We were absolutely stunned to realise that the Queen had such detailed knowledge of Harrison’s fate and that she shared her knowledge and her personal grievance with us.

“We thoroughly enjoyed the following reception, the dinner and the conversations with the Queen, the Prince, the Ambassador, the other guests and the Lady-in-Waiting (who was placed next to me and my wife).”

Mr Henkel also recalled his first meeting with the Duke of Edinburgh, saying: “I have met the Prince in the late 90s, once at the Palace in his capacity as Head of the WWF, of which IBM was then a sponsor, and again in 1998 when we had dinner together with Chancellor Helmut Kohl and Lower Saxony‘s Prime Minister Gerhard Schroeder.

“Prince Philip represented your country at the opening of the Hanover Industrial Fair in the year Britain was the fair’s Lead Country.

“We had a most interesting conversation about the speeches given earlier by Kohl, Schroeder, himself and myself. He spoke of course English but among the two of us also German.

“He obviously spoke and understood German perfectly but kept that capability away from the public.”