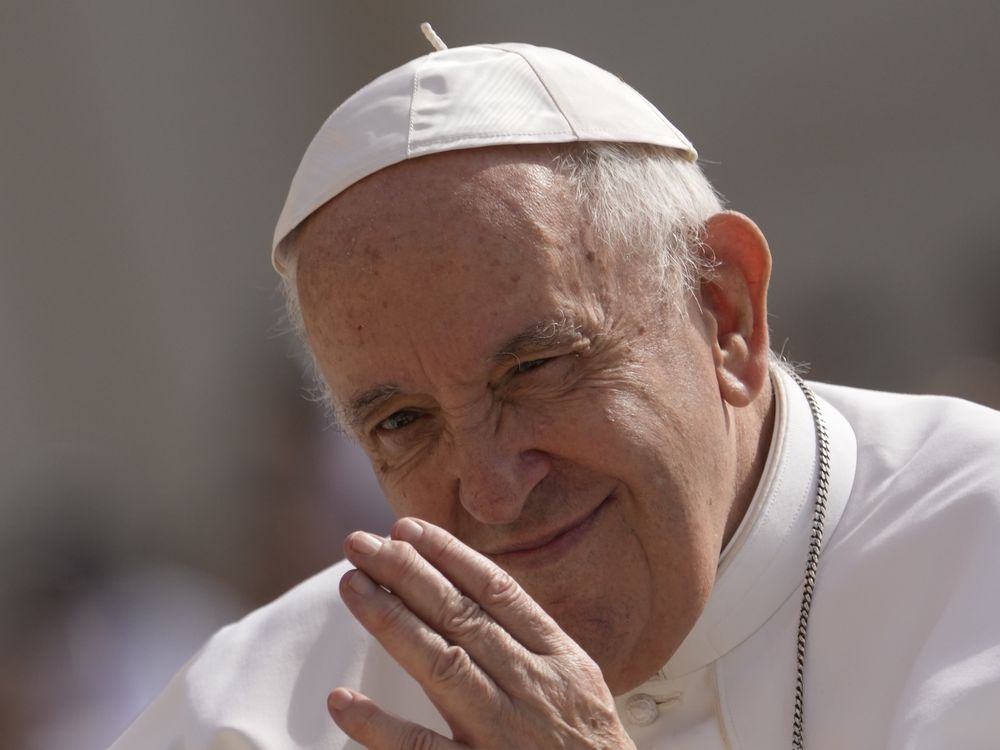 The program for Pope’s trip to Canada next month includes a visit to the site of a former Alberta residential school with survivors, the Vatican said Thursday.

The papal visit is set to start in Edmonton on July 24 and end in Iqaluit on July 29. It is to include public and private events with an emphasis on Indigenous participation.

“We pray this pilgrimage will serve as another meaningful step in the long journey of healing, reconciliation and hope,” said Archbishop Richard Smith of Edmonton, the general co-ordinator of the papal visit to Canada.

Pope Francis is expected to deliver an apology for the Roman Catholic Church’s role in residential schools during the trip, building on sentiments expressed earlier this year during an Indigenous delegation to the Vatican.

At that time, the Pope apologized for the deplorable conduct of church members involved in residential schools.

Pope Francis is scheduled to arrive in Edmonton on July 24 to a brief ceremony at the airport. The next day he is set to join survivors at the Ermineskin Indian Residential School in the community of Maskwacis south of the city.

Gilda Soosay, a member of Samson Cree Nation, said it is a “miraculous event” for her people.

“We have to look forward to what’s coming for our people, our grandchildren and the children coming after that,” said Soosay, who is part of the local committee preparing for the visit.

“We need to begin a healing process for our people here in Maskwacis.”

Ermineskin was one of the largest institutions in Canada. Smith said it “will have a representative role for all residential schools.” He anticipates the apology will come in front of survivors at the school.

Francis is also scheduled to visit Sacred Heart Church of the First Peoples, an Indigenous church in downtown Edmonton, on July 25.

Fernie Marty, an elder originally from Cold Lake, Alta., said he was excited and nervous about meeting Pope Francis.

“We have a unique history happening here. It’s important for my own personal healing to continue,” said Marty, who is a day school survivor and works at Sacred Heart Church.

The following day, Francis is scheduled to attend a large mass at Commonwealth Stadium, home of the Edmonton Elks CFL football team. The facility can hold about 65,000 people.

The pontiff is to go to Lac Ste. Anne that evening where a large pilgrimage takes place each year.

“People are looking forward to being with him. Praying with him at Lac Ste. Anne,” said Rev. Garry LaBoucane, a Metis priest and spiritual director of the pilgrimage.

Due to the 85-year-old Pope’s advanced age and limitations, Francis will take part in public events for about one hour, organizers said.

Crown-Indigenous Relations Minister Marc Miller said the federal government will be providing support to transport survivors, but he did not provide a cost. Planning is taking place to avoid a “logistical nightmare,” he said.

Miller added that he expects to attend events in Alberta.

The Pope is next scheduled to travel to Quebec City on July 27, where he is to meet with Prime Minister Justin Trudeau and Gov. Gen. Mary Simon, and later deliver a public address.

The pontiff is then scheduled to travel to Sainte-Anne-de-Beaupre on July 28 for a mass. Between 10,000 and 15,000 guests are anticipated to attend.

“The Pope is very much looking forward to coming here,” Archbishop of Quebec Gerald Cyprien Lacroix said. “Despite his limited health, he will be fully present with us to live this next step in the process of reconciliation and healing with the Indigenous Peoples of our country.”

Pope Francis is scheduled to meet with Indigenous leaders from Eastern Canada on July 29 before flying to Iqaluit. There, Francis will have a private meeting with residential school survivors and attend a public community event.

The Pope’s priority during the visit is the relationship with Indigenous Peoples, Smith said, adding the pontiff has heard the cry for reconciliation and the longing for hope.

“This is one step in the journey,” Smith said. “But it’s a huge step.”

The program’s release comes as some worried the pontiff’s health may delay the journey to Canada. Earlier this month, a scheduled trip to Congo and South Sudan was cancelled “in order not to jeopardize the results of the therapy that he is undergoing for his knee,” the Vatican said.

Smith said the Vatican’s release of the program should provide an assurance that Pope Francis will come to Canada.

The Indian Residential Schools Resolution Health Support Program has a hotline to help residential school survivors and their relatives suffering trauma invoked by the recall of past abuse. The number is 1-866-925-4419.