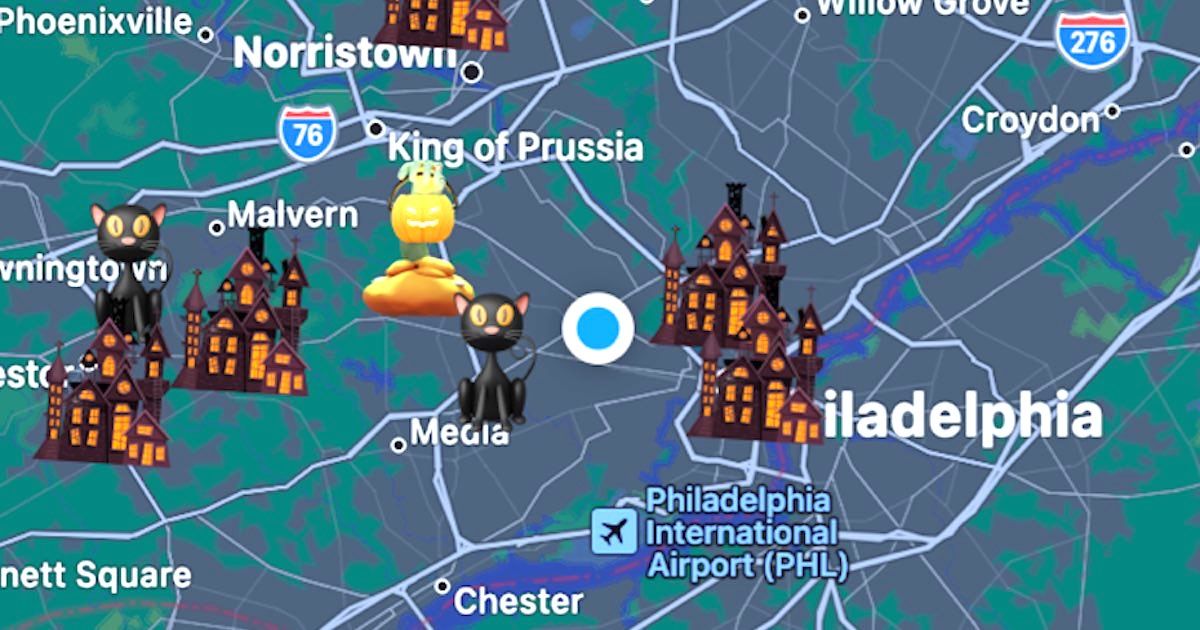 Plus, Marc Vetri’s new steakhouse, public toilets, and more of what we feel like telling you about today.

Get a compelling long read and must-have lifestyle tips in your inbox every Sunday morning — great with coffee!

Check phillymag.com each morning for the latest edition of Philly Today. And if you have a news tip for our hardworking reporters, please send it here.

Now that it’s officially Fall, I think we can all agree that it’s not at all unreasonable to start talking about Halloween. One of the best things about Halloween is seeing who has the craziest Halloween displays in your neighborhood. Some people go all out, especially in this era of animatronics and motion-activated sound effects. If you haven’t been to the Halloween aisle at your local Home Depot or Lowes in a few years, check it out. We’re light years beyond flickering jack-o-lanterns.

But how do you find the best Halloween displays? I mean, other than just walking, driving or biking all over town? Hoping to spy a 12-foot-tall Freddy Krueger replica with moving blade-hands and a sinister laugh protruding out of the front of somebody’s house? Enter the just-released FrightMaps app, developed by Delco dad Mike Kane.

It’s all quite simple. And completely free.

If you’ve decorated your house for Halloween, you take photos of your display and upload them to the FrightMaps app along with your location, any title and description you’d like to accompany the photos, and your email address. Kane vets the submission (you know, to make sure you haven’t uploaded a photo of your butt) and adds it to his database. Notably, the FrightMaps app also allows homeowners to indicate whether or not they are giving out candy on Halloween (and users on the other end will get a notification of any candy houses near them when the big day comes), though it’s hard to imagine somebody going to all this trouble and not at least sticking out a bowl of candy corn.

If you’re in search of the best Halloween displays near you, just pull up the map, and you’ll see icons showing the aforementioned listings. You can check in at locations and leave a review. You can also find commercial Halloween attractions like haunted houses and spooky hayrides, and Kane doesn’t charge those business to be on his map.

The official FrightMaps app launch happens next Thursday at Thornbury Farm in West Chester complete with a bonfire and screening of Hocus Pocus. (Tickets for that here.) But Kane says that he’s already had a lot of response, with some listed Halloween displays as far away as Texas.

If this all sounds a little familiar to you, that’s because Kane is the same guy who brought the world the ChristmasPrism app, which is just like this, but for Santa and reindeer displays rather than burbling cauldrons.

Kane is quite familiar with Halloween decorating.

“You can say I’m obsessed,” he tells Philly Mag. “My sister and I started hosting walk-through haunts in our neighborhood when we were kids, giving people walkie-talkies and stuff. I’ve amassed quite a collection of Halloween items over the years.”

And, yes, Android users. There’s a FrightMaps app for you, too. You can download wherever you get your apps.

But fewer than half of the people surveyed who said they needed to use a toilet in Center City indicated that they would use one of these public toilets. Of course, that might change come New Year’s Day, when the Mummers Parade and its, um, attendant activities heighten the need for (proper) places to relieve oneself.

About This Jeopardy! Business

I don’t know if you’ve heard about this Jeopardy! news, but I’m a little obsessed with the Jeopardy!, so I have. (I also hate the fact that I have to include the exclamation point at the end of the name, but Philly Mag’s copy guru insists that I do.)

The Jeopardy! [ugh] producers are considering a major rule change to the game, one that hasn’t changed all that much in a very, very long time. The idea is that if you sweep an entire category one block right after the other, and without jumping around the board or being interrupted by another contestant, you’d win a cash bonus. Though some Jeopardy! purists have taken to social media groups and such to scoff at the idea, I’m all for it. More money. More fun.

And before you tell me that this “news” has nothing to do with Philadelphia and therefore has no business being covered by Philly Mag, consider this: Philly Jeopardy!  champion Ryan Long was quite good at category sweeps, and he’s appearing in the game show’s Tournament of Champions later this fall. So there!

Check out our interview with Ryan Long here.

It’s looking promising. But we have to remember that this is SEPTA that we’re talking about. And they still haven’t perfected the whole SEPTA Key thing, five years after its debut.

What Are You Doing This Weekend?

From the Food Desk …

Marc Vetri finally opened his Main Line steakhouse, Fiore Rosso. Is it very expensive? Oh yes! Is it very good? Well, Philly mag restaurant critic Jason Sheehan has just weighed in with his Fiore Rosso review. Only two stars, which according to our rating definitions means “come if you’re in the neighborhood.” Ouch!

Oh, and with this weekend ushering in Rosh Hashanah, we thought it would be a great time to tell you about Philly restaurants offering Rosh Hashanah specials. Mmmmmmm.

And From the Hope-Lives-On Sports Desk…

Okay, so Thursday Night Football was on Amazon Prime again. I guess I need to get used to it. With technical support (thanks, hon!), I caught a few minutes, but it was the Steelers vs. the Browns, and like all good Philadelphians, I was brought up to hate the Steelers, so who cares? (Pittsburgh lost 29-17, which is as it should be.)

The Phillies game against the Atlanta Braves was on Fox instead of local TV, which was a pity. But I listened to the first six innings on the radio in the kitchen — hey, the grandkids’ Halloween costumes aren’t gonna get sewn by themselves, yo — so I heard Scott Franzke and Michael Bourn narrate as the Phils went up 1-0 early and, miraculously, held onto the lead behind stellar pitching by Ranger Suarez through the fifth, when he gave up a double to Austin Riley and then walked two batters. But wait! With the bases loaded, he struck out Michael Harris II to end the threat.

Zach Eflin came in in the top of the 7th, and the biggest controversy of his outing was a highly dubious hit-by-pitch call that was totally milked by Austin Riley, and the Philly fans let him know what they thought of that. It was about then that the Brewers sealed a win against the Reds, 5-1, to tighten the wild-card race with the Phils to two. We, uh, don’t have a great record this year of holding onto close leads. But this time around, the stars aligned; José Alvarado got the job done in the top of the ninth, ending the game by striking Robbie Grossman out swinging. Hey, I believe! Maybe. Kind of. Sort of.

In other news, the Union signed captain Alejandro Bedoya to another year, which is a victory for old people (like me) everywhere, because he’s 35, which is, like, 90 in soccer years, and he’s having the season of his life. — Sandy Hingston