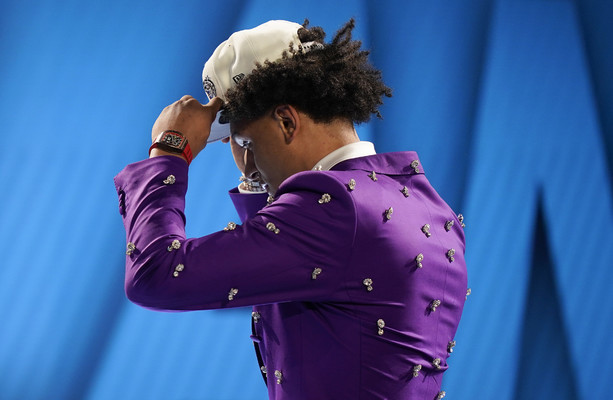 ORLANDO MAGIC MADE Paolo Banchero the shock first pick in the 2022 NBA Draft.

Banchero, who has only played one season at college level with Duke, follows in the footsteps of Shaquille O’Neal after he was the number one pick by Magic in 1992.

Orlando’s decision to opt for Banchero wrongfooted many pundits, with Jabari Smith Jr. and Chet Holmgren expected to be vying for the number one spot.

Even Banchero looked shellshocked by his selection in the immediate aftermath of NBA Commissioner Adam Silver’s announcement at the Barclays Center in New York.

“I really don’t know what to say,” Banchero said. “I can’t believe what just happened. Honestly.”

When the dream becomes reality.

Banchero later told ESPN he had been warned to be ready for anything earlier Thursday after news filtered through that Orlando remained undecided.

“I had a feeling, from the information I was being told, that it was just kind of up in the air,” Banchero told ESPN. “Orlando wasn’t really sure yet, and just to be ready for whatever.

“I didn’t find out, though, that I was actually getting picked until about 20 seconds before the commissioner got on the stage. I didn’t even have time to really think about it or anything. It just kind of happened. I can’t believe it, but I’m ready.”

With Banchero going with the top pick, Holmgren was snapped up by the Oklahoma City Thunder with the second selection.

The 7ft tall Holmgren was a standout for Gonzaga University, averaging 14.1 points and 9.9 rebounds for the Bulldogs.

The 20-year-old impressed with a combination of elite ball-handling and footwork as well as being an expert shot blocker.

“It’s a mix of 1,000 emotions and yet I have zero words to explain it,” Holmgren said. “This is everything I’ve looked forward to for a long time.”

Holmgren joins a Thunder roster that can already call on the talents of emerging star Shai Gilgeous-Alexander and Australian Josh Giddey.

“It’s a great situation, great dynamic, playing with guys like Josh and Shai, as well as everybody down the roster,” Holmgren said. “A lot of great players with unique skill sets. I feel like I can kind of pair up with them and help enhance theirs and they can enhance mine.”

Smith, who had been tipped by many as the No.1 pick, averaged 16.9 points per game along with 7.4 rebounds and 2.0 assists in his single college season for the Tigers.

Smith, whose father Jabari played four seasons in the NBA, is a cousin of Kwame Brown, the No.1 pick in the 2001 draft.

The 19-year-old combines size and shooting touch, with deadly accuracy from three-point range and an athleticism likely to make him a defensive asset for a Rockets team that had the worst-ranked defense in the league last season.

“I feel like I can fit in any NBA system with my shooting ability and my love of defense,” Smith said after his selection.

“I feel I can come in right away and make an instant impact.”

Smith admitted that being overlooked for the top pick would give him additional motivation to flourish.

“I’m happy to get to Houston and give them what they picked.”