A volunteer collects signatures in Phoenix on Wednesday for the Save Our Schools Arizona petition that would stall the expanson of the state’s empowerment scholarship accounts – school vouchers – and put the issue on the 2024 ballot. (Photo by Justin Spangenthal/Cronkite News)

PHOENIX – Of almost 11,000 students who have applied for one of the state’s expanded empowerment scholarship accounts, more than 8,200 have not been enrolled in public school before – a potential loss of $53.9 million to the state’s public schools.

But not if Beth Lewis can stop it.

Lewis is executive director of Save Our Schools Arizona (SOS), which is in the home stretch of its push to collect at least 118,823 signatures to put the scholarship program on the ballot in 2024. That would delay implementation of the law, currently scheduled to take effect Saturday, until 2024 when voters could have their say.

Lewis, a former Valley school teacher, is confident her group can meet that threshold, scheduling a news conference Friday to deliver the petitions to the secretary of state’s office.

Critics of the program say it will siphon off badly needed funds from an already-strapped public school system, what Lewis said would be “kind of the nail in the coffin” for public education.

“I mean, in a sense, it stops the complete decimation of public education,” Lewis said of the petition.

But supporters of the program argue that for a parent or student in a public school, “nothing changes” under the expanded ESA program, which they said is aimed at giving parents and children the freedom to choose the school that’s right for them. 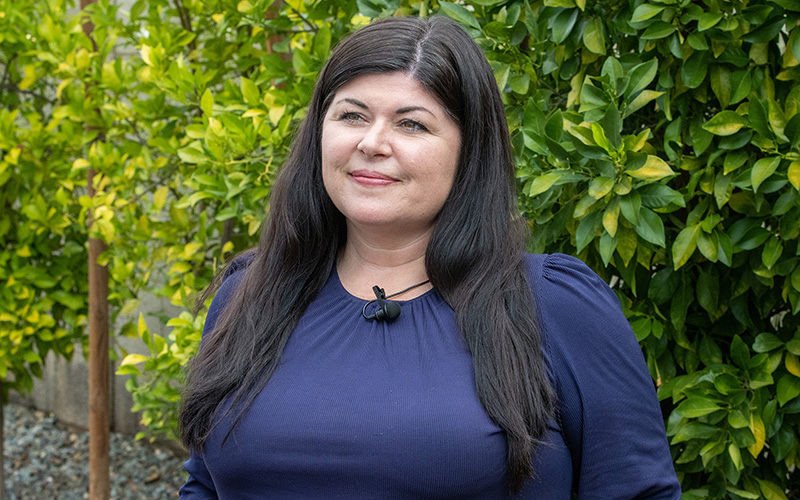 Beth Lewis, executive director of Save Our Schools Arizona, said the expanded empowerment scholarship accounts would be the “nail in the coffin” for the state’s public schools. (Photo by Justin Spangenthal/Cronkite News)

“Parents need the ability to secure the education that’s best for their kid,” said Steve Smith, Arizona director for the American Federation for Children, a national organization that has championed school choice across the country.

“Whether it’s a school that they’re in isn’t performing as well, whether COVID has (stopped) them from a year or two of their learning, and they want to catch up,” Smith said. “Whatever the case is, now more than ever they need to access their funds to provide their child what they need.”

The bill authorizing the universal scholarship law was sponsored by Rep. Ben Toma, R-Peoria, and signed into law in July by Gov. Doug Ducey, who called it among the most “expansive school choice legislation in the nation.”

“With this legislation, Arizona cements itself as the top state for school choice and as the first state in the nation to offer all families the option to choose the school setting that works best for them,” Ducey said in a statement at the time.

Under the program, every student in Arizona, whether they are enrolled in a public school or not, could get state funds to use as a scholarship to attend a school of their choice. The scholarships would give about $6,500 to students in grades 1-12 toward an education at a private or charter school. Kindergarten students could get about $4,000.

It’s a sweeping expansion of the previous law, which limited the scholarships to children in failing public schools or public schools that were not able to meet their special needs.

The Arizona Department of Education reported this week that as of Monday it had received more than 10,906 applications since Aug. 16, and that 76% of those applicants did not have children enrolled in public schools – or about 8,288 students.

Because the funding for ESAs come out of the state’s education and public school budget, those 8,288 students could be taking more than $53 million from public schools.

Smith said the legislation merely gives more freedom to families who can use their ESAs for private, charter, online or homeschooling programs.

But Lewis and others say Arizona schools are already underfunded and this program won’t help. The state ranked 48th in school funding and 47th in spending, according to data from the Education Data Initiative, and 43rd for teacher salaries through 2021, according to the National Center for Education Statistics.

“Part of the concern with any sort of voucher system is that it’s creating a third location for education funding, so not just public education, but then the charter schools and then now the private schools,” Garcia said.

“So instead of funding one healthy system, that supports every single child and every single community, across the state, you have three different systems being inadequately funded,” she said. 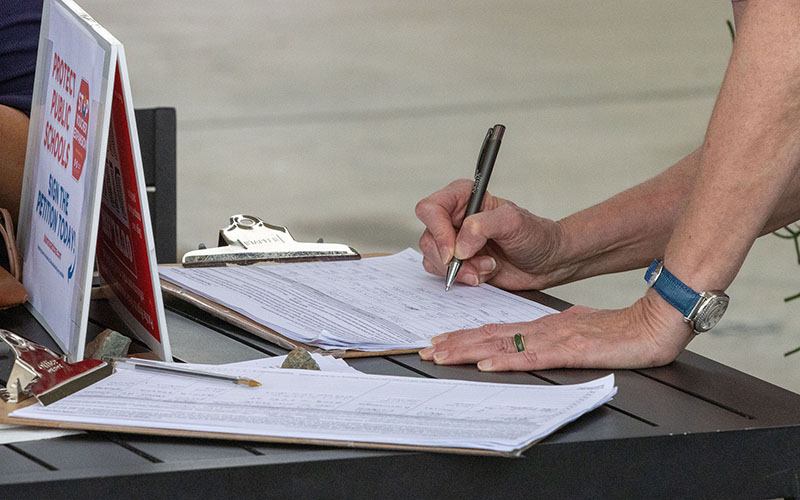 Petition drive organizers need to collect 118,823 signatures by this weekend to put the expanded ESA program on the ballot in 2024, a number they say they’re confident they can hit. . (Photo by Justin Spangenthal/Cronkite News)

Garcia said she knows teachers who have more than 40 students in a class, and high school teachers with a class load of more than 150 students. She said it is hard for a teacher with so many students to help individual students reach their goals.

“The fact that this legislature chose to pass a voucher program shows that they have no interest in making public schools a priority of this state,” Garcia said.

Lewis says the only way to address class size is with funding.

“I think a lot of people don’t understand that it’s a funding issue,” she said. “When you reduce class sizes, you need to hire more teachers and you need to build more classrooms. And they’re like, ‘Oh, I get it. That sounds expensive.’”

While she is confident her group will get the minimum number of petition signatures needed, Lewis said they are working to exceed that number to allow for signature challenges.

“We will definitely need a large cushion,” said Lewis, who expects supporters of the scholarship program to challenge the petitions in court and “absolutely do everything in their power to kick us off” the ballot.

“However, our signatures are collected by volunteers, so they’re very valid and a lot of our folks are teachers and parents and are really eagle-eyed and doing their best, so I feel really optimistic that we can withstand those court challenges,” she said.

And she is optimistic about the challenge that would come over the next two years if they successfully petition the issue to the 2024 ballot.

“We are definitely David that has picked a fight with Goliath but we’ve done it before,” Lewis said. “I’m a firm believer that a small group of very committed people can really make real change.”