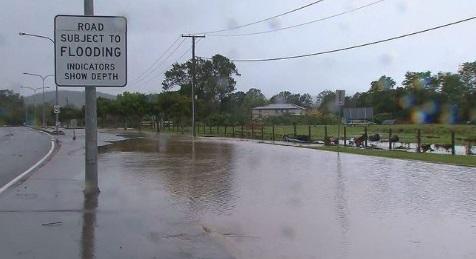 The low-pressure storm system that caused flooding across inland NSW earlier this week tracked towards the coast on Thursday and Friday, with flood and storm warnings covering much of the state’s east.

Severe thunderstorms forecast from the NSW and Queensland border through to Port Macquarie on Friday will extend to the Blue Mountains on Saturday.

Punters were flooded in at the Golden Dog Hotel, the only pub in Glenreagh, a small town in the Northern Rivers between Grafton and Coffs Harbour, after the Orara River reached minor flood levels on Friday.

The river was just below five metres on Friday afternoon, submerging Orara Way, covering Bluffs Bridge and blocking the main road to Grafton.

Roads to Coffs Harbour in the north are still accessible and drivers can access Grafton through longer routes.

Glenreagh’s resident population of 900 were prepared for floods, Lestatt Hammond, from the local bakery, told AAP.

“They know how much rain it takes to push the river over (its banks),” she said.

Ms Hammond, a life-long resident of Glenreagh, said water levels were still well below those reached in the February floods.