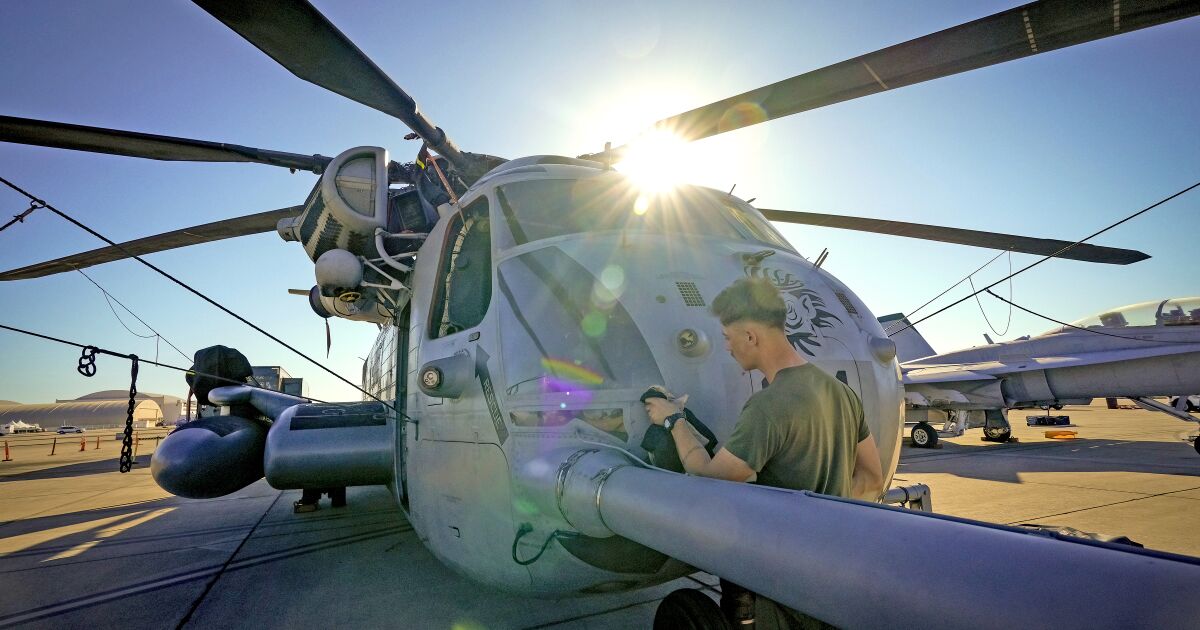 For the first time in nearly three years, the skies above Marine Corps Air Station Miramar will be filled with an assortment of aircraft performing for hundreds of thousands of people this weekend at the Miramar Air Show.

The show, which begins Friday and runs through Sunday and is free to the public, will feature performances from some of the military’s most cutting-edge aircraft and top civilian aerobatic flyers, along with dozens of aircraft, both new and old, on the flight line to view up close and personal.

“It’s been almost three years since MCAS Miramar was able to open its doors to our neighbors and share in our love of aviation, and I am extremely excited to be able to do so once again,” said Marine Col. Thomas M. Bedell, the commanding officer of MCAS Miramar. “We are proud to call America’s finest city home and bring back one of the world’s most anticipated aviation exhibitions.”

Back this year — outfitted with a new aircraft — are the U.S. Navy Blue Angels, a precision flight demonstration team. The Blue Angels recently traded in their legacy F/A-18A/C/D Hornets for the F/A-18E/F Super Hornets and received the C-130J Super Hercules logistics support aircraft.

“Getting to show off the C-130J to the Marines that are all here, flown by Marines, and the Super Hornets will definitely be exciting,” said Lt. Katlin Forster, events coordinator for the Blue Angels.

Forster, who flies the No. 8 aircraft, spent her first tour at Naval Air Station Lemoore flying the F/A-18F Super Hornet, so she said getting to showcase it here is a pleasure.

Throughout the weekend, the Blue Angels will be seen — or heard — flying overhead across San Diego County as far west as Mission Bay, east as Santee and north as Fallbrook.

The Blue Angels’ upgraded aircraft are in line with the theme of this year’s air show, “Marines: Fight, Evolve, Win,” which focuses on the technical innovations the Marines are undertaking in an effort to transform and modernize the force, officials said.

New to the show this year is a 5G Technology Expo, where local companies were invited to showcase some of the technology they’re developing that the military may be interested in.

“There’s everything from robotics, electric vehicles, some autonomous systems — things that you’re not going to see out on the line just yet, but coming in the future, the things that we’re looking to leverage,” said Lt. Col. Bob Weingart, station plans officer who works with the station’s innovation team.

“Our advantage in technology is being increasingly challenged, so it’s really important that we … take advantage of the emerging technologies that come from local companies right here in San Diego and tap into the enthusiasm and knowledge that we have in some of the local universities so we can put that brainpower to work to develop combat power for the future.”

Crowds will also get to see the Marines Corps’ F-35B demonstrating some of its unique skills and aviation capability at the forefront of the military’s aircraft force.

“The F-35 is just a giant with technology,” said Lt. Col. Michael Patrick Fisher, executive officer of the “Black Knights” of Marine Fighter Attack Squadron 314, the first to receive the F-35C Lightning II. “It’s just unbelievable when you look at how much data it can give you and how strong it is on the battlefield.”

On the civilian side of things, attendees will see aerobatics aimed at pure entertainment as well as demonstrations of the latest in high-performance, precision flying, said Michael Goulian, a 25-year pilot who will be flying the Extra 330 aircraft this year.

“It’s one of those things where you want the audience to leave there saying, ‘I never knew that an airplane could do that,’” Goulian said.

In the weeks leading up to the show, San Diego Veterans For Peace, along with more than a dozen other local environmental, social, and religious groups, have been holding protests, calling for the show to be canceled as an unnecessarily dangerous contribution to the climate crisis.

San Diegans “are asked to make sacrifices to reduce our carbon footprint, yet … in this time of climate crisis, I think it’s time for us to examine how much the military does contribute to the problem,” said Gary Butterfield, the group’s past president and a Vietnam-era veteran.

“This year, we want to send a message to the Navy that this would be a great opportunity to show the local community that they’re serious about climate change and climate mitigation. Since the air show is done for entertainment, they could cancel it without affecting operational readiness,” he added.

The groups have been demonstrating for years to drum up support for their call ahead of the air shows, asking that the show be canceled and for people not to attend.