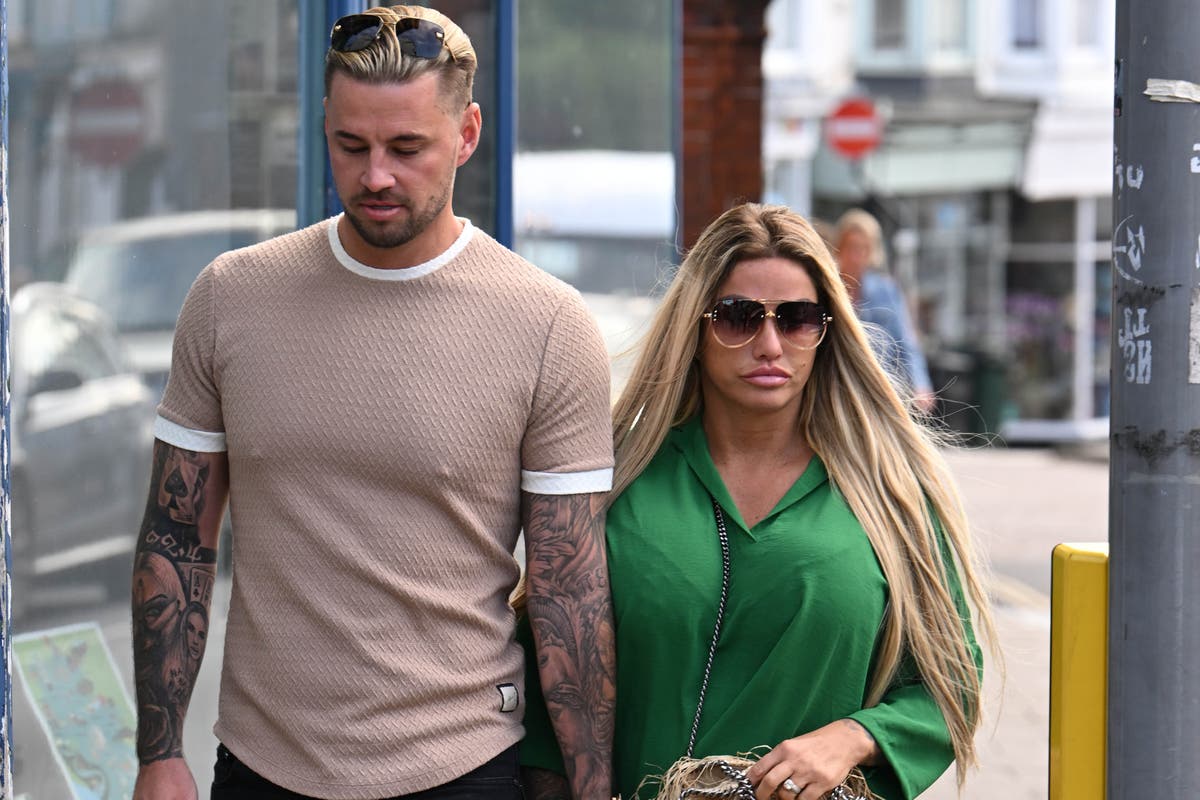 ormer glamour model Katie Price has escaped jail and been handed an 18-month community order at Lewes Crown Court after admitting breaching a restraining order by sending abusive messages to her ex-husband Kieran Hayler about his fiancee Michelle Penticost.

Price had arrived at Lewes Crown Court, on Friday morning, in an all-green outfit clutching the arm of her fiance Carl Woods.

She was heard to say “suck my d***” as she made her way past reporters, one of whom asked her about the chance she could go to prison.

Price, 44, had appeared at Lewes Crown Court on May 25 where she was accused of harassing Michelle Penticost, the partner of her ex-husband Kieran Hayler, in January this year.

Thought to be triggered by an Instagram post by Ms Penticost, Price’s message read: “Tell your c***ing w****, piece of s**t, girlfriend not to start on me.

“She has a restraining order so shouldn’t try to antagonise me as she is in breach and I’m sure she doesn’t want people knowing that she was having an affair with you behind my back. That gutter s**g.”

During her hearing last month, Judge Stephen Mooney warned Price warned the former glamour model that she risked going to prison for violating the terms of the restraining order.

Nicholas Hamblin, representing Katie Price, said on Friday, his client had pleaded guilty to the breach but she had been under a “misunderstanding” that the restraining order “worked both ways”.

He said there was an element of “provocation” and she had been “over-reacting as she felt she was being criticised”.

He added: “She has shown signs of remorse, she accepts an indirect breach.”

Mr Hamblin said that Price had sought help for her emotional problems at the Priory Clinic.

He said she suffered from a “depressive disorder and anxiety”, and added: “Miss Price is learning to cope with her emotional problems and to not react in the way she has in this case.”

“It’s perhaps a case of building someone up only to knock them down.”

He added that “there was a lot of good to be said” for Price and she was considered in a probation report to be at “low risk of reoffending”.

In a victim impact statement read to the court, Penticost said the impact of the restraining order breach by Price had a “devastating effect” on her mental wellbeing.

She said: “The impact of what Katie has done is very upsetting, I feel threatened and intimidated.

“I feel demoralised and not wanting to go out. The language used made me feel scared. I felt it was an attack on me.

“The consequences are I feel she will attack me. I felt by having a restraining order it would make me feel safe but by someone breaching it it has made me feel very vulnerable.”

When she broke the restraining order, Price was serving a 16-week suspended prison sentence for a drink drive near to her home in Sussex when she was uninsured and did not have a valid licence.

Price is due back in court again next month when she is accused of speeding.