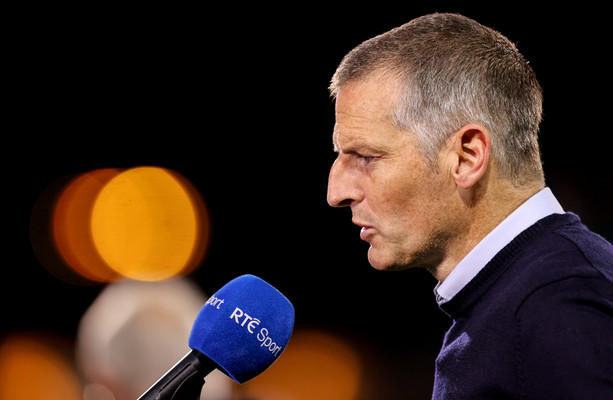 IT WAS a pivotal call.

With 10 minutes remaining and the score at 1-1 during Ireland’s playoff first leg against Israel, Stav Lemkin took down Aaron Connolly as the striker sprinted through on goal.

There was a surge of anticipation as the referee dramatically ran towards the two players.

Initially, it looked like he might book the Irishman for perceived diving. Instead, he produced a red card for the Israeli defender to loud cheers from the home crowd.

It was initially assumed the Venezia loanee had won a penalty, but Croatian referee Dario Bel ultimately pointed to the edge of the area for a free kick.

Jim Crawford’s displeasure was obvious by his angry reaction on the sideline and afterwards, the manager confirmed he felt his side could have and perhaps should have gotten more from the game.

“I thought we were the better team,” he told reporters. “We created the better chances, it was disappointing to concede when we did, we were on top of the game and it’s always hard to take, conceding from a set piece as we work very hard on them.

“In the second half we didn’t get going, the first 15-20 minutes but finally the momentum came with us, I thought we were very good at the finish, we just had to freshen up certain areas of the pitch.

“It was a problem as they had a couple of higher up midfielders, we needed someone, one of our three defenders, to press them and we didn’t, they took a shot, Brian made a great save and from that they scored from the set piece.

“Overall I am proud of the players, we asked them to empty the tank and every one of them did that, the boys we brought on were excellent.”

Israel down to 10 men after foul on Connolly by Stav Lemkin, but should it have been a penalty?#rtesoccer
📺 Watch Live https://t.co/aR8cFzAlWf
📱 Live updates https://t.co/GM5KdWBhOi pic.twitter.com/yDQwH7Mgmn

On the non-penalty decision, Connolly himself added: “To be honest, I didn’t actually know where I was on the pitch, I couldn’t really tell. But everyone else I spoke to seemed convinced that it was a penalty so I’ll have to look at it back.”

Rare insights on sport’s biggest names from the writers who know them best. Listen to Behind the Lines podcast.

Ireland were also left to rue the concession of a soft goal just before half-time.

Goalkeeper Brian Maher came for Osher Davida’s corner but failed to claim it, leaving Idan Gorno with the simple task of heading into the empty net.

Crawford acknowledged the mistake but also pointed out that the player had gotten his defenders out of jail by making a good save moments earlier.

“He knows, so there’s no point [dwelling on it]. The game is still on, Brian is experienced, he played so many senior games now, and he knows quite well.

“But it was just stopping it at source, a ball played in just outside the 18, one of our centre backs has to get out there and press and we didn’t. Lee [O’Connor] was coming over from wing back to press and we gave them a free shot at goal, Brian makes a save and it’s ironic that he was at fault.”

However, Ireland responded as Evan Ferguson’s superb header — the first goal he has scored for his country at U21 level — ensured the sides went into Tuesday’s second leg level.

“It was a great finish,” said Crawford. “He has been scoring goals like that all week in training and it doesn’t surprise me, it was a difficult game for him, it took him time to get going but he had moments of pure class and we should be excited by him. He is only 17 and to score for the U21s in such an important game will do loads for his confidence, he’s a fantastic player with a brilliant attitude.”