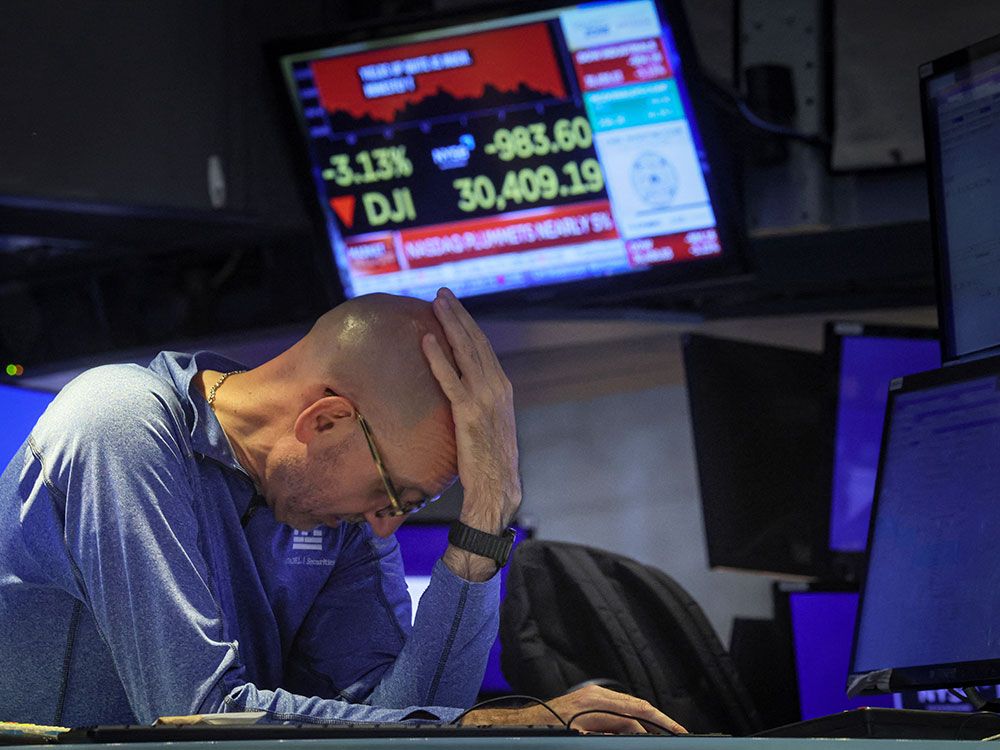 Gobal markets came under more pressure Friday as the mood over the economic outlook around the world turned sour. Equities, currencies, other asset classes – virtually nothing has been spared in the economic cyclone that has been mounting over the past few weeks. Here’s what economists and analysts have their eyes on during this trading day:

The next issue of FP Investor will soon be in your inbox.

Indices are down across the board in Friday trading. The S&P TSX composite index slumped over 2.5 per cent in the first hour to 18,516 as  energy shares fell to their lowest in over two months and oil prices gave up 6 per cent.

“There is no appetite for risk this Friday morning, as stocks across Europe drop as much as three per cent, led by the FTSE MIB,” BMO economists Jennifer Lee and Shelly Kaushik said in their morning note. “Asia was not spared, as the region broadly sold off, with the Hang Seng down over one per cent, while the CSI 300 kept its losses to 0.3 per cent.”

Bank of America Corp. strategists are pointing to a “cash is king” attitude among investors who are showing the most pessimistic attitude towards the markets since the 2008 global financial crisis. Cash inflows hit US$30.3 billion as global equity funds outflows went to US$7.8 billion, bonds lost US$6.9 billion, and gold investment dropped US$400 million during the week of Sept. 21, according to the bank.

The latest retail data from Canada was also disappointing Friday, with sales falling 2.5 per cent in July as lower gasoline prices contributed to the decline. While Canadians were saving money on fuel, the cash windfall did not go to other retailers, said Desjardins managing director and head of macro strategy Royce Mendes said in a note after the data. Mendes also said the modest rebound of 0.4 per cent in nominal retail sales that Statistics Canada estimates for August may point to higher volumes.

“That said, the trend is clear, consumers are pulling back on spending,” Mendes said. “The slowdown in consumption is exactly in line with what the Bank of Canada is trying to engineer with its rate increases.”

The Bank of Canada has been aiming to bring high demand back into balance with constrained supply by undertaking an aggressive rate hiking cycle this year, that has so far raised the policy rate three percentage points.

Across the pond, the British pound fell two per cent to crash below US$1.11 for the first time since 1985, adding to pressures the currency faced earlier in the week. The plunge came as newly appointed U.K. Prime Minister Liz Truss introduced the country’s biggest tax cuts since the early 1970s.

The Bank of England raised its key interest rate 50 basis points to 2.25 per cent this week, which Schamotta noted, before the decision, would help widen interest rate differentials against the pound.

U.S. Federal Reserve Chairman Jerome Powell made good on his Jackson Hole comments in late August that the central bank was willing to trade off economic growth if it meant stamping out decades-high inflation. The Fed’s 75-basis-point hike earlier this week showed that Powell wasn’t bluffing, a detail economist David Rosenberg of Rosenberg Research & Associates Inc. was quick to pick up on.

“What part of ‘don’t fight the Fed’ do markets not understand?” Rosenberg wondered in his Friday morning note to clients. “Chairman Powell’s message is clear: the Fed means it this time, and it’s not pussyfooting or fooling/messing around.”

“Whether the Fed is ultimately right or wrong in what they are doing, they control the ‘magic lever,’ thus investors should be prepared for further weakness economically and markets-wise,” Rosenberg added.