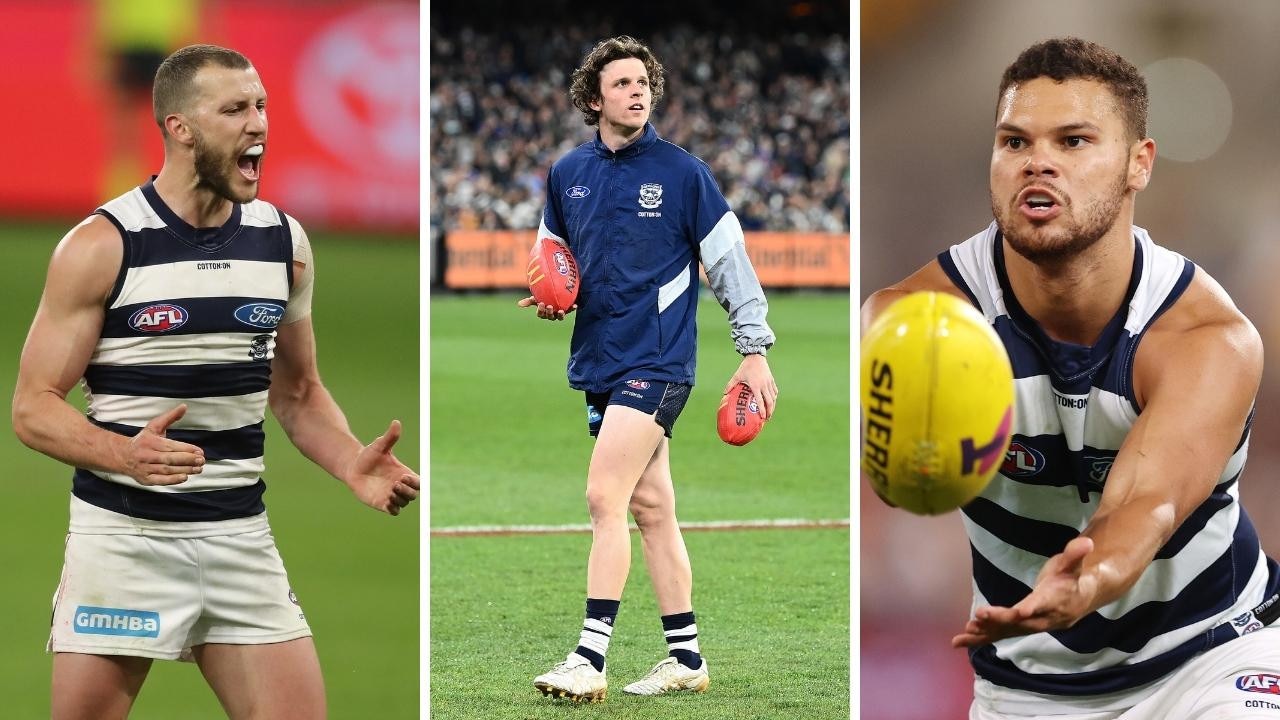 AFL Grand Final day has arrived, with Sydney and Geelong set to compete for the biggest prize in the game.

Stay up to date with all the latest news as we build up to the first bounce.

Geelong coach Chris Scott made the tough call to leave youngster Max Holmes out of the Grand Final yesterday afternoon.

It’s understood Holmes was able to move at 100 percent during a secret training session on Friday morning and was confident he’d recovered from a hamstring injury suffered in the preliminary final win over Brisbane.

But Scott clearly didn’t want to take any risks into the game and instead made the brutal early call following Friday’s Grand Final parade which Holmes took part in.

Either Brandan Parfitt or Mark O’Connor, who has been the medi-sub for the Cats two finals, will come into the team.

Holmes, 20, has been a key part of the Cats rise up the ladder before he went down with a hamstring problem in the third quarter of the preliminary final.

With Holmes out of the team Parfitt has been told he will be part of the club’s 23 but is yet to be informed if he is in the 22 or will be used as the medi-sub.

The Cats have been aware for most of the back-half of Grand Final week that they were not prepared to take a risk on an underdone Holmes.

Even with a neural hamstring issue there is still a possibility it would fail him again early in a Grand Final.

But he needed a chance to be prove his fitness, with Parfitt to be preferred to wingman Sam Menegola.

Parfitt’s contested game will hold him in good stead against Sydney, given he is an elite inside ball winner.

Menegola is a better like-for-like swap for wingman Holmes but the Cats can tinker with their side and put Mitch Duncan or Zach Tuohy onto the wing.

If the Cats had played Collingwood they might have pushed for Menegola over Parfitt but at this stage Parfit expects to be a part of the side.

He has not played for 35 days given the club’s VFL side was not part of the finals but Geelong has played a scratch match against the Footscray VFL side and been in heavy match simulation.

It will give him confidence he will be able to run out a game if he is selected or is used as a sub but injected into the game early.

This will be the last AFL grand final with the current medi-sub format with the AFL committing to a review of the sub rule.

The AFL Doctors Association has sought assurances from the league that it will change a rule that puts massive pressure on club doctors to sub out players with border-line or minor injuries.

WHO IS RUNNING IN THE AFL GRAND FINAL SPRINT?

The 21-year-old — who recently moved to Torquay — has arguably the biggest job of all Cats come the final face-off for the season against Sydney.

But he’s just the man for the job, according to teammate Mark Blicavs, who said there was no need to offer advice to the backman who has taken some of the biggest names in the game this season.

“He’s had a great year and he’s taken the best forward almost every week.

“He’ll just take their whole forwardline in his stride. He’s naturally competitive, so it’s more … the less advice you give him, the better.

“He just keeps it simple.”

If anything, Blicavs said De Koning would be anything but fazed by the prospect of the task at hand.

Blicavs said the Cats would be taking “a team focus” approach to their battle with the Swans’ midfielders.

“They run pretty deep in their midfield, so I think as a midfield group we’ll just go head to head with their midfield. I tend to play better when I’m on a body, but I don’t think it’ll be a specific match-up,” he said.

In a case of unfortunate timing but an incredible weekend for the Blicavs family, the Cat’s sister Sara will watch on from Sydney where she is competing for Australia in the FIBA Women’s Basketball World Cup, with both as important as each other when it comes to the respective prize.

“A Grand Final (is the one) for me and a World Cup for her,” Blicavs said.

INSIDE THE CHEER SQUAD: HOW THE CATS ARE FEELING

Geelong superfan Paul Kellett, said he was “very nervous” ahead of the clash against the Swans.

Mr Kellett is part of the 250-strong Cats cheer squad, who are responsible for creating today’s banner.

He said the banner had a simple message which he hoped inspired the players to victory.

“Sydney are an excellent team, they are super-duper good,” he said.

“They have got stars everywhere. I think it is going to be incredibly close but I believe in the boys and we are ready. Hopefully today they can prove it.”

Mr Kellett, from Belmont, has decorated his house in Geelong memorabilia, having hand sewn a banner to his front fence as well as covering it in Cats themed banners.

He said he will be wearing a navy blue and white cape covered with badges of the team.

Inspirational Geelong captain Joel Selwood says he will have talks on his future with club chiefs after Saturday’s premiership decider.

Selwood, 34, will attempt to win his fourth premiership in the showdown against Sydney Swans and then decide next week whether to bow out on a glorious high.

The champion onballer, who will run out on to the MCG with Gary Ablett’s son Levi as part of a tribute to the Ablett family, said he played every game like it was his last.

But the 354-gamer bristled when asked directly about whether he was playing on next season at Friday’s press conference.

“Another one (reporter) trying to push me out the door, but that’s OK,” Selwood said.

“I just feel so lucky that I have been able to be in a (great) side along the journey. Forty finals it has crept up even on me.

“Right from the outset I played among a lot a good players and I play every game like it is my last. This one will just be the same.

“We will have those discussions and we will be aligned as a footy club whatever that is but there is no resting yet.

Geelong says it will be ready to handle the heat when Sydney Swans turn up their trademark withering defensive pressure in the Grand Final.

The Cats are clear favourite to win their fourth premiership in 16 years with the oldest team ever played in an AFL/VFL Grand Final.

Since Round 17, the Swans have an average pressure rating of 196 and it soars to an average of 202 in the first term when the Cats will be braced for a tackling onslaught from Sydney led by hard nuts James Rowbottom, Callum Mills and Luke Parker.

Geelong coach Chris Scott said the Cats would be ready to absorb the Sydney Swans barrage with Geelong’s 10 30-year-olds set to help provide a significant edge in experience.

“Both teams will have confidence in their system,” Scott said.

“We don’t want to pull ourselves apart just to try to combat all of their strengths, because we will forget about what we are good at.

“Their pressure is good but the top-four or six teams this year have been pretty good at that as well and I don’t think that (pressure) is their only defensive weapon. They’re well-rounded.

“Any grand final I have been a part of I haven’t looked at the opposition and thought there are massive holes we can exploit.

Geelong has played finals in 11 of the 12 campaigns under Scott and has made it to the preliminary final in eight of those years as part of a remarkably successful run.

The club was criticised for its ageing list profile and trade strategy which has seen the club take only one top-10 draft pick (Nakia Cockatoo in 2014) since inspirational captain Joel Selwood in 2006.

Scott overhauled the team’s game plan this year to increase direct ball movement and scoring power in the front half.

Scott said the Cats were primed to deliver on the big stage after a carefully-crafted fitness plan helped deliver Patrick Dangerfield and Jeremy Cameron in top shape for September.

“If you forced me to take a step back and have a look at the past decade or so I think our supporters should be proud of the consistency of our players,” he said.
“We do have an experienced group and they deserve any successes that come their way.

“They have been a privilege to coach. This year we go in great form, we have got good availability, and I think our game is in really good shape.

“As much as anytime I can remember I feel like we have given ourselves every chance.”

WHO THE EXPERTS ARE PICKING

Top of the ladder, smashed the Lions. Injury at the Swans.

Best team for the year for a reason. Reliance on stars gone, have a sense of destiny about them

Greatest season gets the greatest Grand Final as the greatest of all time gets his first premiership medal in the last game of a Buddy long contract.

The dominant side of the competition all year with the weapons to get the job done.

Sixteen wins in a row would be fitting end for the most consistent and best team of the season.

Cats will play with a spare defender to take sting out of Sydney pressure.

Experience counts for plenty and these Cats have it in spades. It’s Danger time.

Perfectly balanced between offence and defence. Will make it 16 in a row and end one of the more dominant season by a club.

The Cats have been the best team all year and don’t have many weak links.

Cameron and Stengle the game-breakers despite Sydney’s pressure turning this into an old-fashioned scrap.

Geelong’s form is compelling. The Cats have shown few weaknesses in their 15-game winning streak.

Geelong is in great form, fit, and has been the master of all. Sydney may be unbalanced without Sam Reid.

Sydney’s elite pressure over four quarters coupled with their dynamic forward line and underrated backline will deliver the Swans an earlier than expected premiership.

The Grand Final is back where it belongs in Australia’s sporting capital. The city is the winner.

Healthy, too much experience, too many match winners forward of centre.

Geelong’s defensive mechanisms will disrupt the Swans ball movement and their attack is potent.

I’d love to see Joel Selwood – a champion on & off the field lift the cup.

Have looked like the premiers for a long time now and should be a bit too strong on Saturday.

The best team all year prove why, with the best player in the competition firing.