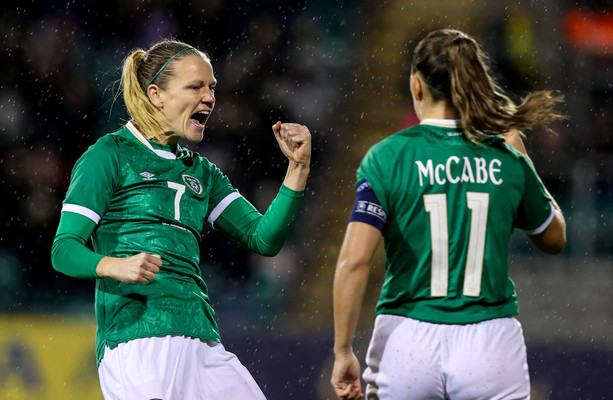 THE WORLD CUP dream is more alive than ever for Diane Caldwell and the Republic of Ireland women’s national team.

Vera Pauw’s side are in play-off territory; a win over group minnows Georgia on Monday [KO 4pm Irish time, live on RTÉ 2] putting them clear in second place and in the box-seat ahead of September’s monumental double-header against Finland and Slovakia.

The Girls In Green have never reached a major tournament, the closest they’ve come the Euros play-off defeat to Iceland in 2008.

“I wasn’t a part of that play-off,” Caldwell, who played the second half of the 2021/22 season with childhood club Manchester United, recalls. “I had been banished from the team after a falling out with Noel King so I wasn’t part of that group.”

To get back in, it took a new manager. “Sue Ronan came in, she had been my underage manager and she brought me in straightaway. She said, ‘You should never have been out.’”

The vastly-experienced defender has been there ever since — for the most part, anyway — with 85 caps to her name and counting.

Understandably, there’s no shortage of motivation to secure a coveted play-off spot as is, but that exile and her absence last time around is an added incentive for 33-year-old Caldwell.

Not that she’ll say that out straight, though. Always about the team, never the individual.

“That’s our target as a group, that’s our expectation now that the group winner spot is gone. The play-off spot is still achievable, but we haven’t gotten there yet. There are still three games to go, we haven’t done anything yet.

“It was a great result against Sweden [who have qualified] but it’s these next three games that are going to determine if we get that play-off spot. We have to take every game as it comes and be absolutely 100% focused on each one. The next one is always the most important, and that’s Georgia now.”

A thigh injury ruled Caldwell out of that monumental 1-1 draw with Sweden in Gothenburg, and she was forced to watch the action unfold from Manchester amidst a period of rehab.

“It was strange to look from the outside for once,” the Balbriggan native reflects. “I was the biggest fan and so proud to watch the performance and they showed what they are capable of. A terrific result, but we know we have another level to get to.”

That said, the end goal of reaching a major tournament “has become a little bit more attainable,” she concedes, with admittedly the best group of players Ireland have ever had in situ.

Having been a regular starter for much of her international career, Caldwell has found herself in and out of the XI of late. Savannah McCarthy, who has since been sidelined with a cruciate ligament knee injury, was favoured in the early stages of the 2023 World Cup qualifying campaign, while Pauw has no shortage of options in defence.

That can only be a positive, Caldwell nods, concentrating on the fierce competition within the squad as she deals with non-selection.

“Generally the Irish team has always had a good defensive line and competition for places. That’s what makes a team strong, all across the pitch and it’s getting to that stage of healthy competition and every team needs that to get to the next level.

“I think I rate my mental strength as one of my highest attributes. I wouldn’t have gotten to where I am without being mentally strong, that’s for sure. I’ve always had challenges throughout my own career in various ways, selection being a small one of them, so it’s just something you have to deal with as an athlete at the top game. You just have to keep focusing on your strengths, improve your weaknesses and try to do whatever you can to get your moment and seize that opportunity.”

She did just that at United; the big Red Devils supporter joining in January after a stint in America with North Carolina Courage.

Caldwell in action for Manchester United.

“It was everything I hoped it would be and more,” she smiles. “As a life-long fan it was my dream to play for them and wear that jersey. I never thought it would be possible, given they didn’t have a [women’s] team until recently. It was an amazing achievement for me personally, it’s hard to put in to words but I have tremendous pride and honour from it.

“I played every 90 minutes from when I arrived to when I got injured. I unfortunately got injured just before the showpiece at Old Trafford, it was obviously very bitter to miss that occasion. But every minute that I was there, I cherished it. I said that going into that experience – whatever happens long term, happens, but I’ve accomplished my dream and no one can ever take that away from me.”

Out of contract this month, unless a new deal is agreed, Caldwell’s future plans are up in the air at the moment.

She looked settled and unquestionably did a job for Mark Skinner and an injury-hit United in the Women’s Super League, but having also enjoyed successful spells in Germany and Iceland, as well as the US, it will be interesting to see her next move.

“Nothing’s decided yet with my future, with Man United or whoever. Right now, it’s not in my mind, I’m just focused on what I can do here with Ireland. Different team, different targets. That’s all that I’m focusing on right now.

“I’m not really thinking about the club, the main focus is on Georgia because the next game is the most important.”

Enjoying “ideal preparation” in Antalya, Turkey, adjusting to the ferocious heat and edging out the Philippines in a friendly, Ireland have been boosted by a recent jump up to a record-equaling high of 27th in the Fifa world rankings.

“It’s always nice to see but we haven’t achieved anything yet,” Caldwell stresses. “We haven’t yet qualified for the Euros or World Cup and that is our hope and target. The rankings take care of themselves as a by-product of results and performance. We need to get our performances right. It’s part of the journey and not our target.”

She expects a different challenge from Georgia, who sit 124th themselves.

The hapless Georgians fell to an 11-0 hammering in Tallaght last time out, and have conceded 41 goals and scored zero in their six defeats thus far in this campaign.

“They’re learning and improving every time they play,” Caldwell concludes. “They have taken heavy defeats but getting experience of this intensity so they will only get better. They’re at home so it won’t be easy, we need to be sharp and up for it. No international is easy so we need to be up for it.”