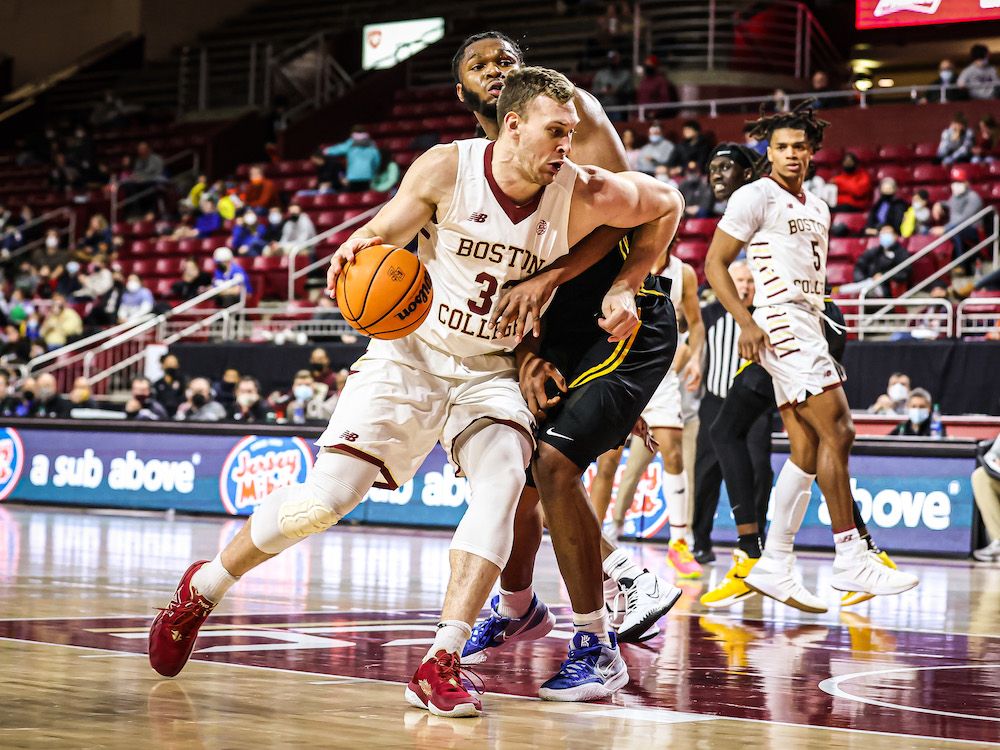 He was 15 years old, living thousands of kilometres away from home, chasing his dream, alone.

Back home in Surrey, his family dog had just died. Two thousand kilometres away at Balboa Prep in San Diego, James Karnik was being tested to see just how much dog was in him.

“I’ve had a really blessed life. But everybody has to go through their own challenges,” Karnik said Thursday. “My mom said … it would just be boring if everything was given to me. So it’s just great for me to have to work for my basketball career. And that’s what I’ve done.

“I had a literal military coach, that would just do crazy things (at Balboa). I’m talking like, I would get clotheslined, I’d be bleeding profusely out of my nose, and he’d make me run sidelines until they had to shut down the gym. Just crazy things.

“This was my first experience with the U.S.; I thought his was what it was all like — just crazy coaches. And I’m like, OK, this is what it’s going to take. … And I’m not going to lie — it almost broke me. But I just kind of stuck with it.”

Karnik’s path has meandered from secondary school at Earl Marriott and B.C. Christian Academy in Port Coquitlam, to prep school at Balboa and Orangeville. It was a stop first at Lehigh University, before Boston College came calling to acquire his talents for the bruising and competitive ACC in NCAA’s Div. 1.

And on Thursday, he made his first professional roster, signing with the Fraser Valley Bandits of the CEBL. He’ll make his debut at the Langley Events centre this weekend when the Bandits host the Montreal Alliance (Friday night, 7 p.m.) and Newfoundland Growlers (Sunday, 4 p.m.).

“We are really excited about the addition of James Karnik to the front court. I followed James throughout the season at Boston College and he had a great year with some really big games against Duke and other high profile teams,” said Bandits head coach Mike Taylor. “What we like about James is his size, physicality and his athleticism. It is great that James is a B.C. kid and can come home and play in front of family and friends. Hopefully, he can attract a lot of interest from the area and show the next generation of kids that they can be a Bandit, too.”

Karnik, a 6-foot-9 forward, had entered his name in Thursday’s NBA Draft, but the introduction to the pro world has been a rocky one. His agent opted to forgo any workouts in May — he also advised Karnik to steer clear of the Bandits, who had contacted him — in lieu of training in Boston and Texas. He said the Celtics had reached out to him directly, as had the Sacramento Kings and Minnesota Timberwolves.

“I thought ‘OK, I’m guaranteed at least one workout, right?,” he said. “And if one comes, I just gotta kill it. I know my personality. I know my work ethic. I know I’d kill it. If I kill one, more will come. Just none came.”

Karnik is a bruising forward with three-point range. His 10 ppg average seems modest, but it came in just 20 minutes of play in the toughest conference in NCAA basketball.

“I’ve always been an under the radar dude.

“I got a first team all star at (Ontario) provincials,” he said of his time at Orangville, the same program that produced NBAers Jamal Murray, Thon Maker and Ignas Brazdeikis, with whom he won a Ontario Scholastic Basketball Association (OSBA) championship.

“The guy who won the MVP was R.J. Barrett. And the runner-up was (NBA player) Nate Darling.

“All like just great, NBA talented guys … and I didn’t even get a Team Canada invite from that.”

The plan is to get some experience and, more importantly, some film for scouts as he looks to the next stage of his career. Holding a Czech Republic passport, he can play in Europe as a domestic — and, for the national team, one that is ranked 12th in the world.

“I’m excited to be able to play with my hometown team,” he said. “I think this is a great first step.

“My agent is talking to the Rockets about potentially being on their summer league roster.

They’ve given me kind of like a ‘maybe-ish.’ I’m hoping if I can get some good pro film, maybe a summer league spot … and then probably Europe.”