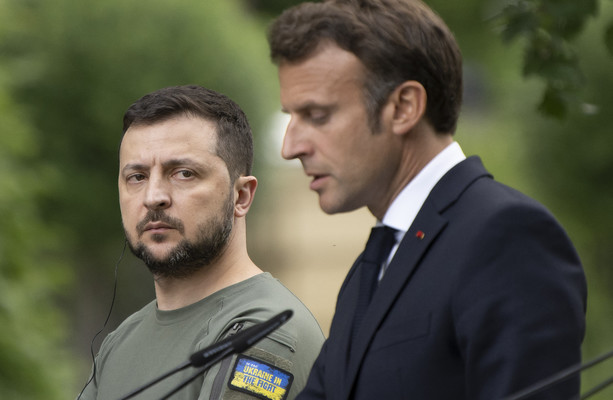 LEADERS FROM AROUND the European Union are convening in Brussels today with one question at the centre of their agenda – whether to name Ukraine as an official candidate for EU membership.

The EU Council, which is comprised of heads government, including Taoiseach Micheál Martin, is set to discuss the application from Ukraine, as well as those of Moldova and Georgia, to join the 27-country bloc.

Almost four months since Russia began its brutal invasion of Ukraine, the country will find out whether its application for candidacy has been accepted – with a much faster turnaround than other states that have waited for years to begin the process.

The Journal will be reporting from Brussels over the next two days to bring you the latest from the discussions.

The Taoiseach has made it clear that he supports Ukraine’s bid for membership and the principle of EU enlargement more broadly, along with other countries that back Ukraine, especially eastern members such as Poland and Estonia.

However, others have put up some opposition and the summit will see leaders try to reach a consensus on a decision that will be historic for the European Union.

It will play out to the backdrop of a recommendation from the European Commission that Ukraine’s application be accepted.

Inviting EU leaders to the summit, EU President Charles Michel said that the main focus of the meeting will be the need to take “further steps to strengthen our continent’s security and stability”.

“Now is the time to acknowledge that the future of Ukraine, Moldova and Georgia lies within the EU,” Michel said.

“I will invite you to grant candidate status to Ukraine and Moldova. In parallel, we will continue to provide Ukraine with strong humanitarian, military, economic and financial support.”

Here’s what the next 48 hours could mean for Ukraine.

To become an EU state, prospective members must fulfill a set of obligations called the Copenhagen criteria, which outline democratic, economic and political conditions that must be met.

Ukraine is not starting entirely from square one in trying to reach those criteria – it’s been working on becoming closer to the bloc since the signing of the European Union–Ukraine Association Agreement in 2014.

Speaking to The Journal, Professor of Politics at DCU’s School of Law and Government Donnacha Ó Beacháin explained that annual reports from that agreement (prior to the war) showed Ukraine was doing well in some areas, such as civil society, democracy, education, culture, and gender equality.

However, it fell down on corruption and infrastructure like transport and roads.

And now, since Russia’s invasion, “everything is in abeyance”.

“I think that there’s naturally an emphasis on the positive right now and that this is a major step. It’s symbolically very important,” Ó Beacháin said.

“I think once the euphoria subsides and when the war comes to an end, as hopefully it will sooner rather than later, I think that there will be less glamorous and behind-the-scenes hard work at meeting the criteria, which require a lot of painful reform,” he said.

“One of the issues with corruption is that you have a lot of vested interests in maintaining aspects of the status quo and all of that has to be dismantled to make an effective case for EU membership.

Ukraine is fighting for survival right now – we don’t even know what will be left of Ukraine after this war is finished, so to talk about meeting EU criteria is very abstract at this time.

While the requirements to join the EU are set out in the Treaty of the European Union, how long the process takes varies widely for each country.

Countries like Albania, North Macedonia, Montenegro, Serbia and Turkey are formally candidates but with different experiences during negotiations.

Turkey was declared a candidate back in 1999, with negotiations opening in 2005 but largely stalling over policy misalignments between it and the EU.

In 2020, draft negotiation frameworks were presented to member states for North Macedonia and Albania, which were first declared candidates in 2005 and 2014 respectively.

Meanwhile, other countries like Bosnia & Herzegovina and Kosovo have been petitioning for years but have not yet been named as candidates.

“It gives you an idea of how haphazard it is – there’s no fixed time for each country, because to some extent, it’s a very specific application for each country,” said Dr Emmanuelle Schon-Quinlivan, lecturer in European politics at UCC’s Department of Government.

Dr Schon-Quinlivan told The Journal that she does not believe Ukraine would become an EU member in the next five years – it could take at least 10 to 15.

“There are obviously political considerations and this is where Ukraine is trying to fit itself in terms of Zelenskyy using all his arts for convincing people and pressuring them morally in terms of giving the candidate status to Ukraine.”

But for “frugal” countries like Sweden, Denmark and the Netherland, “there will be no moral guilt” that could persuade them to accept Ukraine before it meets the criteria, she said.

Similarly, Professor Ó Beacháin said there is “no guarantee just because you’re a candidate status country that you become an EU member and there’s certainly no guaranteed timeline”.

“The fact that there’s no fast track accession doesn’t exclude the fact that you could have a fast beginning to the process and that’s certainly what’s occurring now with Georgia and Ukraine.”

He said the EU’s consideration of granting candidate status has come “earlier than what would have been expected” because of the political factors around Russia’s war on Ukraine.

I think there was a rather unanimous or there was a consensus there that Ukraine deserved because of its current predicament to be fast tracked in terms of candidate status – but there is a division within the European Union about how quickly membership might come.

No news is bad news
Support The Journal

Although Ireland will be supporting Ukraine’s application at the summit, which is likely to be accepted, not every country has been on the same page.

France, which holds the presidency of the EU Council until the end of this month, has proposed that Ukraine join a ‘European Political Community’ along with countries like the UK and Turkey that would work closely with the EU without being members.

“I think Macron and France, as President of the Council for a few more weeks, is trying to find an alternative solution with the European Political Community,” Dr Schon-Quinlivan.

“Macron knows his presidency is finishing in a couple of weeks – and his presidency has been dominated by the war in Ukraine – and he wants to wrap it up with something concrete to give it to Ukraine, because he knows, and his Minister for European Affairs [Clément Beaune] said, if we follow the regular path, Ukraine will take 15 to 20 years to come in,” she said.

It created a huge uproar in France but at the same time, this is absolutely the reality of things. I cannot imagine the EU will ever accept a country which is at war, even less a country that’s at war against Russia.

Additionally, she said that it would be “doing no service” to Ukraine to bring it into the EU while it is trying to rebuild itself after the war and that fast-tracking its application would be unfair to other Balkan countries that have been seeking entry for years.

“This is why, for totally political reasons, Macron is suggesting his European Political Community. This is something that’s very French,” she said.

And “some countries on the western periphery, like Portugal, have said if Ukraine comes in, it would completely move the centre of influence of Europe towards Eastern Europe and we will be left out”.

“That’s a reflex from a Western European country and I don’t think that is is an acceptable reason not to take Ukraine in, but I know it has been a reaction by Portugal in particular.”

Professor Ó Beacháin noted it is “not surprising” that there are varying stances among EU states on Ukraine’s application.

“There’s always been differences of opinion and when it comes to Ukraine, the issue is emotional and it strikes a chord with countries like Poland and Estonia and Latvia,” he said, where people “have a very strong view that Ukraine should be a member as quickly as possible”.

“And then you have ‘old Europe’ – France, Germany, Italy, the Netherlands, who are looking more long term and talking in terms of decades.”

Despite the different perspectives, it’s expected that the Council will follow the European Commission’s recommendation and offer candidate status to Ukraine.

EU Council members will first meet leaders of Western Balkan countries this morning before the main meeting begins this afternoon.

Alongside the membership applications, the Council will discuss the latest developments in the war, including its impact on global food security and the EU’s support for Ukraine.

The Journal reporter Lauren Boland will be covering the EU Council meeting live from Brussels. Follow Lauren on Twitter for updates and find full coverage on The Journal.