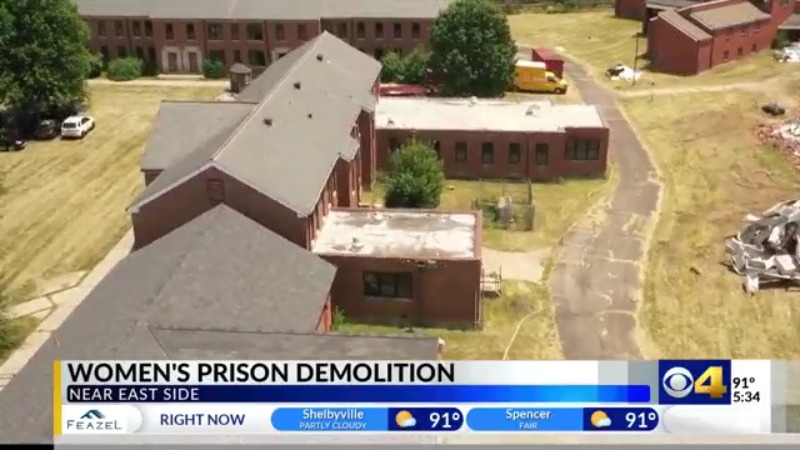 INDIANAPOLIS — In 1872, the State of Indiana built one of the first prisons in the United States to house women on 15 acres on the block at Randolph and New York streets on Indianapolis’ near east side.

Until 2009, the site was home to many of Indiana’s most serious female offenders.

The location was repurposed as a Department of Corrections re-entry facility for inmates transitioning back to their communities, but since 2017, the prison grounds have sat empty. It at first was secured, and then later, not so much, as vandals have broken windows, torn through fences and made off with copper and other valuable metals for scrap.

This week, demolition crews arrived on the grounds to begin tearing down the prison for the property’s next mission, whatever that may be.

”I would suggest a green architect to take the lead on this so we could have things like affordable housing, community space and restaurants all to co-mingle together,” said Kay Grimm, a longtime neighbor. “It’s right in the middle of our neighborhood, so it’s a make-or-break it what they decide to do with it.”

Grimm, like all the Willard Park neighbors, wait in vain for state officials to include them in talks to consider the former prison ground’s future.

“Let’s engage the community so we can actually hear the things that we are interested in,” said Joey Newsom, president of the Willard Park Neighborhood Association. “We really value our historical structure. Indianapolis’ near east side has a lot of really cool stuff, and this is one of the really unique features of the entire city.”

The neighbors hope the administration building and the chapel, which date back to the prison’s earliest days, will remain standing.

“Things like a trade school, an urban farm, especially if they leave the chain link up, we could run goats and sheep in there,” said Grimm.

Mayor Joe Hogsett told FOX59 that while the city has no control over the state’s decision, he would like to see affordable housing on at least part of the site as Indianapolis will eventually turn Michigan and New York streets into two-way streets to make the near eastside a destination, as opposed to a pass-through community.

Governor Eric Holcomb designated a portion of the near east side as an Indiana 21st Century Talent Region to encourage the City of Indianapolis as well as business, academic and other institutions to boost education and raise incomes and grow the local population.

“When you can provide local small businesses, when you can provide places you can walk to, that just increases the value of your neighborhood and enjoying your community so much better,” said Newsom. “We’re talking economic viability, we’re talking job creation, all those things can be done right here and building into our community, so, it’s a win-win for the state and the city. We have a great opportunity here for everybody.”

Total demolition and clean up of the land are expected to take the rest of the year.

The Department of Administration looks forward to hosting community meetings to give all in the neighborhood the opportunity to express their ideas for the site this summer.