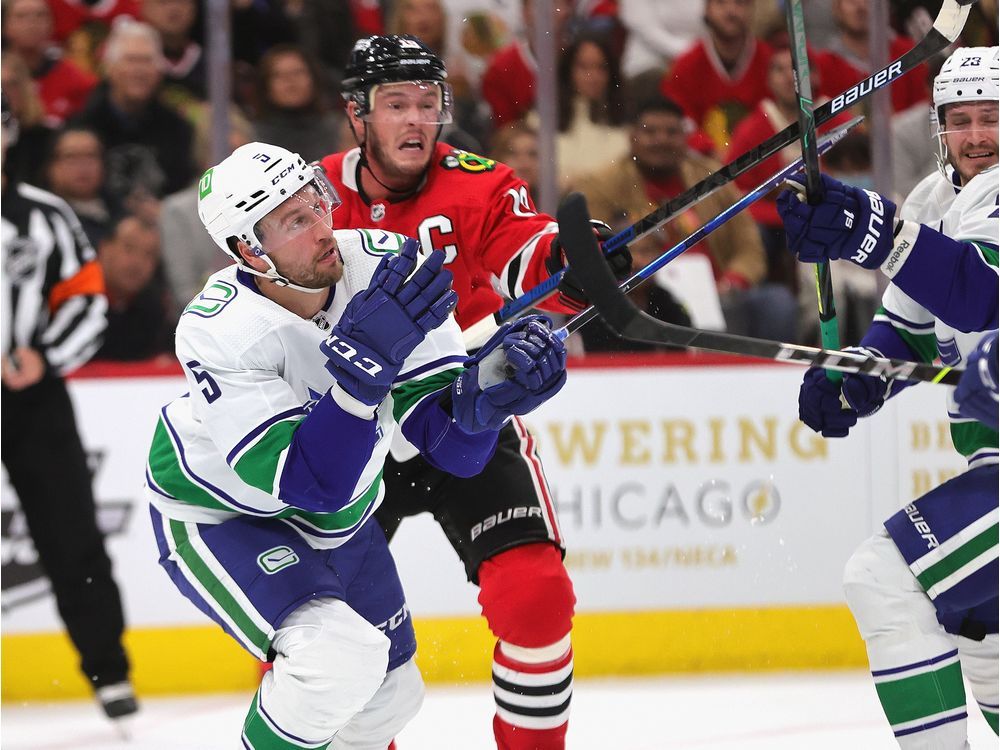 We’re looking back at the 2021-22 Vancouver Canucks with a focus on Tucker Poolman. We’ve been breaking down the season and taking a look at how player situations stack up going into 2022-23 …

How 2021-22 went: A series of mysterious and lingering migraine headaches limited the right-shot defender to 40 games and he ended the season on injury reserve. If that wasn’t bad enough, his career has included shoulder surgery, a concussion and a puck in the face while with Winnipeg, plus a bout of COVID-19 in Vancouver. Poolman played 13 of the first 14 games this season, but a pair of health episodes derailed his season and present a level of concern about finding a solution to the setbacks.

The Dubuque, Iowa native had a migraine episode in Winnipeg on Jan. 27. He played 7:54 of the first period during a 5-1 road triumph and didn’t return for the second period. The play-by-play log showed that the 6-foot-2, 200-pound blueliner didn’t absorb a heavy hit or any kind of contact that could have resulted in a whiplash to promote discomfort and headaches. He was sidelined for 26 games, but then was buoyed by the promise of symptom-free skating and practising.

Then came the second setback April 3 at Rogers Arena in a 3-2 overtime loss to Las Vegas. He didn’t play a second-period shift and left after logging just 4:25. It was later revealed to be a recurrence of what’s crippling his career. He had landed a first-period, defensive-zone hit on Michael Amadio at 3:23 and followed with similar contact on Jonas Rondbjerg at 8:30 in a third pairing with Travis Dermott. He seemed fine. He wasn’t.

Poolman had been symptom-free for two weeks and the last episode was demoralizing. Migraine headaches can be hereditary or caused by a number of factors, including concussions, and can last for hours or days. Poolman missed a game with a migraine while with the Jets in 2018.

Aside from his confusing health status, there’s nothing confusing about the game Poolman must play. In his final season with the Jets, he was paired with Josh Morrissey at one point, but a lower tandem is his true calling.

“Responsible in the D-zone and trying to be accountable,” he told Postmedia. “And if I’m doing my job right, it allows players to be predictable. I have to make sure I’m staying up in the play and have a good gap.”

How the future looks: Poolman is in wait-and-see mode and so are the Canucks. His agent, Dean Grillo, told Postmedia on Wednesday that his client has accelerated his heart rate without symptoms during off-ice workouts in Grand Forks, N.D., where he excelled at the NCAA level.

“Everything is trending the right way and we’re hoping for that because it (migraine) is such a mystery,” said Grillo. “He has done some high heart-rate stuff and he’s hoping to get back on the ice soon and be strengthened. I don’t now about that (migraine) stuff and I don’t think anybody knows. Let’s put it this way: I think he’d call me if something went sideways.”

Where a healthy Poolman fits in the pecking order — he was signed by the previous regime — is a good question. There is cost certainty but no guarantee he won’t suffer a setback when main camp ramps in Whistler on Sept. 23-24.

Management has been critical of back-end structure and puck transition on zone exits. It wants to get faster, younger and stronger — and also find a long-term, right-shot  to pair with Quinn Hughes — so where does that leave Poolman? That’s a lot of salary and term for a depth defenceman.

Carolina has given right-shot blueliner Ethan Bear, 24, permission to talk to other clubs and that could pique the Canucks’ interest on the restricted free agent. The 5-foot-11, 197- pound Regina native has arbitration rights, but had just 14 points (5-9) in 58 games with the Hurricanes, suffered long-term COVID-19 symptoms, a lower-body injury and didn’t play in the post-season. He’s coming off a two-year, $4-million extension signed with Edmonton in 2020.

Greatest strengths: Must rely on size and strength as a down-low deterrent to remain relevant in an always-changing speed and skill game.

Greatest weakness: An obvious hesitancy to wonder if the next hit or simply playing at a high pace is going to trigger another migraine.

Is he trade bait?: Possible but not probable. Health concerns plus money and term are a tough sell.

The big question: Can he finally be rid of migraines, or will they continue to curtail his career?

Read more from our Canucks Under the Microscope series

More news, fewer ads: Our in-depth journalism is possible thanks to the support of our subscribers. For just $3.50 per week, you can get unlimited, ad-lite access to The Vancouver Sun, The Province, National Post and 13 other Canadian news sites. Support us by subscribing today: The Vancouver Sun | The Province.