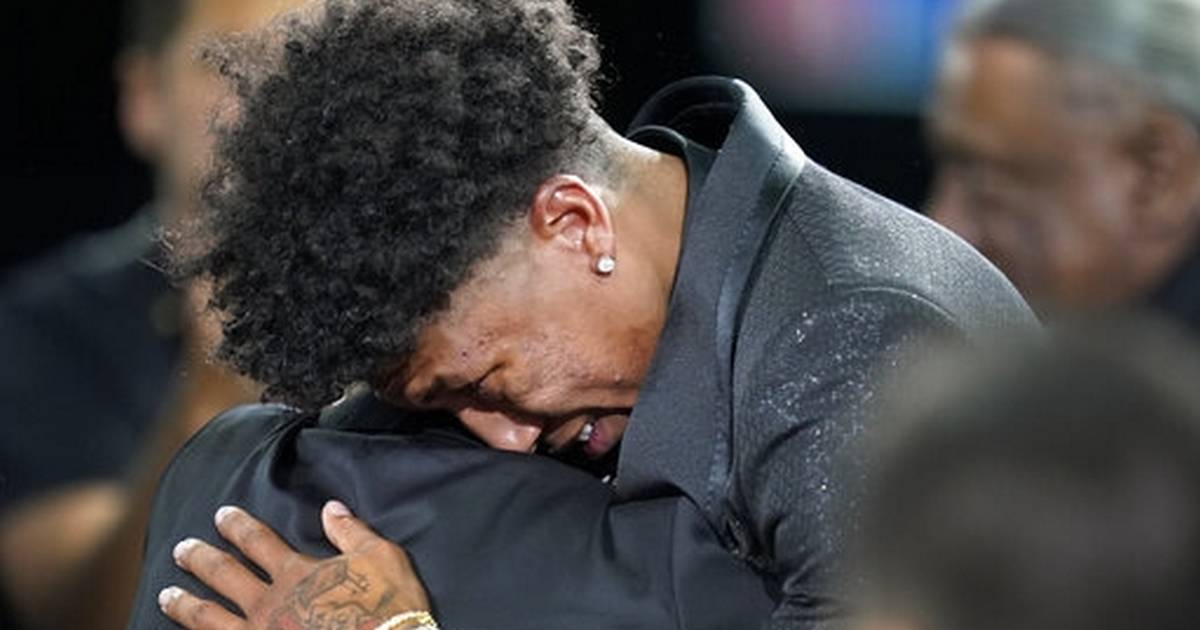 The Bucks believe the hard road he took to the NBA will help the 6-foot-5 wing thrive now that he’s finally made it as the 24th overall pick in the draft Thursday night.

‘What it tells us is he’s a fighter,’ Newton said. ‘It doesn’t matter if he gets knocked down, i.e. maybe not playing as much as he thinks he’s going to play, or not doing as well initially. He’s going to continue to get in the gym every day and compete and work hard.’

But it’s not just Beauchamp’s intangibles that had the Bucks insisting they never expected him to still be around at No. 24. They also love his athleticism and his ability to defend multiple positions with his 7-foot-1 wingspan.

‘We were desperately trying to move up to make sure that we could get an arrangement where we could get him, but he was there,’ Newton said. ‘And we’re happy with that selection.’

Assuming Beauchamp stays with the Bucks, it would mark the first time the Bucks have made an opening-round pick that they’ve kept beyond draft night since taking Donte DiVincenzo out of Villanova with the 17th overall selection in 2018.

DiVincenzo spent 3 ½ seasons with the Bucks before getting dealt to Sacramento in February as part of the four-team trade that brought them veteran center Serge Ibaka.

Milwaukee hasn’t made much use of the draft lately as it has focused on acquiring veterans to support two-time MVP Giannis Antetokounmpo, the 15th overall selection in 2013.

The Bucks also have limited first-round opportunities in future years because they’ve used much of their draft capital to obtain established players.

They traded their 2023 first-round pick in the deal that helped them add P.J. Tucker for their 2021 championship run. They dealt their 2025 and 2027 first-round selections in the trade that brought them Jrue Holiday. They also have potential pick swaps with New Orleans in 2024 and 2026 resulting from the Holiday trade.

That makes it important that Beauchamp emerges as a quality player as the Bucks attempt to lengthen their championship window.

The 21-year-old is regarded as a strong defensive player. Beauchamp averaged 15.1 points and 5.8 rebounds for the Ignite this season.

He was the second Ignite player to get drafted, as Dyson Daniels went eighth overall to the New Orleans Pelicans. Beauchamp came to the Ignite after averaging 30.7 points, 10.5 rebounds and 4.8 assists at Yakima (Washington) Valley College in a pandemic-shortened season.

‘We’re a defensive team, and when we can add another piece that can defend multiple positions, we think (it) is a very attractive move,’ Newton said. ‘I think he, arguably, will be probably our ‘” maybe outside of Giannis ‘” most athletic guy.’

Newton said the Bucks saw Beauchamp play multiple times and brought him in twice during the pre-draft process. Newton noted that Beauchamp felt comfortable with the Bucks and said how much he wanted to be in Milwaukee.

‘We like what he brought to the table and once again (what was) really big for us is his competitive spirit,’ Newton said. “(He’s) a kid that is coming from a difficult background and has something to fight for. And that has a lot of value with us.’