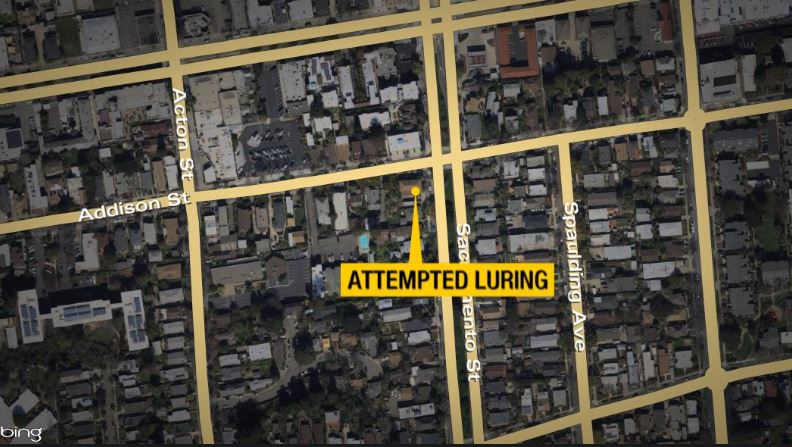 BERKELEY, Calif. (KRON) — A woman tried to lure a 12-year-old boy into her car earlier this week, the Berkeley Police Department announced in a Nixle alert. The alleged incident happened on Tuesday in the area of Sacramento Street and Addison Street.

Around 5:30 p.m., the boy was riding his scooter on the sidewalk of Sacramento Street when a car stopped In front of him, according to police. The suspect got out of the car and tried to persuade the boy to get inside.

The woman approached the boy, and the boy ran away and hid in a nearby driveway. A few minutes later, the boy walked back out to the sidewalk, but the suspect was still there.

She then began to follow the boy in her vehicle. The boy was able to run away from the suspect in the opposite direction of traffic and escape, according to police.

The suspect, described to be a Black woman about 30-40 years old, was driving a newer model white Honda or Toyota sedan. Police said she has a light complexion, is about 5-foot-4 tall, “chubby” build and with black hair in a bun.

Berkeley police said they believe this is related to another incident on Aug. 29. This incident involved a 13-year-old girl who was walking near Allston Way and McKinley Avenue around 6 p.m. when a white car pulled up next to the teen, and the suspect tried to get her inside.

The girl refused and kept walking away from the car, authorities said. The teen later told her parents about the incident.

If you have any information about these attempted kidnapping cases or you believe you have been approached by the suspect, please contact the Berkeley Police Department Robbery Unit at (510) 981-5742.