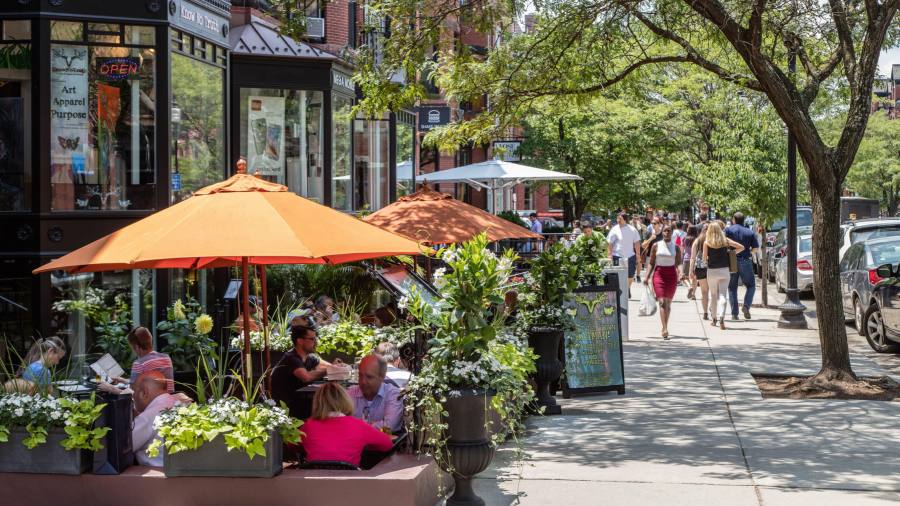 Boston’s property market has boomed in the past year. In June, the average home price peaked at a record $900,000, a gain of 11 per cent over June 2021, according to the Greater Boston Real Estate Board (GBREB).

Prices of Boston’s luxury homes increased at an even sharper pace, fed by a surge of high-end condo developments. The average price hit $2.2mn in June, up 16.1 per cent from the previous year, and nearly 30 per cent from June 2020, according to real estate brokerage Redfin.

But just as in other midsized US cities ranging from Austin to Portland, Oregon — whose popularity had raced in the aftermath of Covid-era restrictions as people reassessed their housing needs — signs of market decline have begun to appear. Rising mortgage rates, inflation fears and a volatile stock market are beginning to take their toll on Boston’s buying spree.

The number of single-family homes sold in Boston in July 2022 fell 18.6 per cent year-on-year — to the lowest volume in more than a decade — while condo sales sank a full 25 per cent during the same period. Pending sales were also down by 10 per cent this summer — despite nearly 20 per cent more active listings, reports the GBREB.

Although these falls are hardly America’s steepest — key Florida markets are faring far worse — fears of a bubble have begun to emerge.

“Boston is not unique as many US markets now are considered ‘overvalued’,” says Selma Hepp, deputy chief economist at property analytics company CoreLogic. Growth rates for Boston homes have fallen to 10 per cent annually from 13 to 14 per cent annually, according to Hepp, who says she anticipates this number to reach 6 per cent by the end of 2022 and potentially half that in 2023.

Enthusiasm among some buyers remains. Across the city, a crop of ultra-luxury condo projects — in branded hotel developments from the likes of Four Seasons, St Regis and Raffles — continue to lure UHNW buyers (both local and foreign) as well as pushing up top-of-the-market prices. The average Raffles unit, for instance, is $3.8mn, nearly double the average numbers at the top of the Boston luxury market.

At the same time, once less-favourable areas such as Dorchester — and non-city centre districts like Somerville — are attracting veteran Bostonians keen on bigger spaces at lower prices.

Take Casey, who, along with his husband Joey (they did not wish to disclose their surnames), recently bought a three-bedroom, 1,900 sq ft condo in Dorchester’s increasingly desirable Savin Hill area for just over $900,000. The couple — who were renting in far-costlier Cambridge — exemplify Boston’s current crop of buyers: Casey works in healthcare, Joey in finance, and both have sizeable salaries and home-office hybrid work arrangements.

“We looked across the city, but were able to get three bedrooms instead of two in our price range in Dorchester,” says Casey. “The area also has a nice gay population and it’s within walking distance to a beach.”

“Dorchester prices are $500-$700 a square foot,” he says, which is less than half the cost of historically upmarket areas such as Back Bay or South End. Dorchester still abounds in traditional housing-stock styles such as the “triple-decker” homes that are found throughout Massachusetts and which Casey and Joey purchased.

Triple-deckers also form the core of an innovative East Boston housing scheme. The East Boston Community Development Corporation will buy 36 mostly triple-decker buildings containing 114 rented homes in order to keep them affordable. A trust of neighbourhood groups would operate the development. The project, which is set to be finalised later this month, is the first of its kind east of the Mississippi River.

Despite those historic homes, Dorchester, like the rest of Boston, has experienced a surge in the types of large-scale development whose new-build, high-end housing is helping inflate average sales prices across the city. The most notable Dorchester development is a 1.56mn sq ft project with nearly 600 homes spread across a trio of residential buildings along with retail space, a park, plaza and four laboratory buildings (the latter a response to Boston’s ever-expanding biotech industry).

Still in planning stages, the project — if completed — will form a triangle with two additional equally grandiose redevelopment schemes including Southline Boston, which will inhabit the former Boston Globe newspaper headquarters.

Across town, WS Development’s massive Boston Seaport is a 33-acre mixed-use development close to the Financial District with anchor tenants including Amazon — which will soon occupy more than 1mn sq ft of commercial space — along with rental and sales towers with nearly 2,200 total units. Also along the waterfront is the forthcoming St Regis, where prices begin at just over $2mn for a one-bedroom apartment.

Such numbers, Dekermenjian says, are not reflective of Boston as a whole, where pockets of affordability can still be found. For instance Megan, who did not wish to disclose her surname, moved with her husband and two children to a renovated three-bedroom home in Somerville two summers ago which they bought for $1.5mn, just down the street from their previous home.

“That was our budget and we completely assumed we’d have to settle for a suburb further out such as Belmont, Arlington or Lexington,” she says. “We still can’t believe that not only could we stay in Somerville, but our kids can still walk to school.”