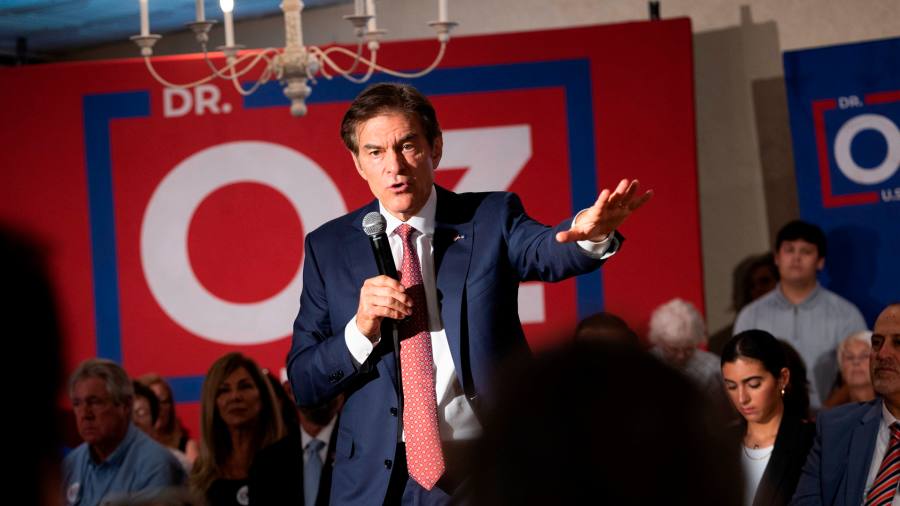 The 2022 US midterm elections are set to be the most expensive ever, with Democrats and Republicans pouring record amounts into their campaigns as they vie for control of the two houses of Congress.

Accounting for inflation, total spending by all House and Senate candidates will surpass the 2018 record of around $3bn by at least $50mn at the current pace of spending, according to a Financial Times analysis of OpenSecrets campaign finance data and available Federal Election Commission filings.

These totals do not include spending by outside groups, such as super Pacs, which can add billions more dollars to elections. The Center for Responsive Politics estimated about $5.7bn was spent in the 2018 midterms, including outside investments.

Many experts expect the spending to increase even more aggressively in the remaining six weeks before the midterm elections, as has historically happened following Labor Day.

In Pennsylvania, where Democrats hope to flip a Republican Senate seat, candidates have already spent more than $80mn, making it the most expensive race so far this cycle.

Senate races have become increasingly nationalised in recent years. “[In 2018] Beto O’Rourke in Texas was just raising money nationally,” said Travis Ridout, co-director of the Wesleyan Media Project. “People out of state were putting [up] yard signs for these candidates.”

Record spending has been driven in part by record fundraising from small donors, a trend stemming from the 2016 presidential election, when Donald Trump unexpectedly beat Hillary Clinton.

“They see the end of the world if the other party wins . . . that’s an incentive to give money,” said Ridout.

Trump’s presence has boosted fundraising by encouraging a divisive political climate, according to Sarah Bryner, director of research and strategy at OpenSecrets. “Small donors are driven by ideology and affection and alienation from the political system,” she said.

Republicans in particular have spent much more on races than in 2018 due to several bitterly contested Senate primaries earlier in the year. Primaries in states such as Ohio, Pennsylvania and Arizona pitted Trump-endorsed candidates against other Republicans, a contrast that drew massive investments from billionaires such as Peter Thiel and Ken Griffin.

The primaries and expansions of voting windows in states with more early and mail-in voting have forced campaigns to spend for a longer period, according to Ethan Eilon, president of Republican digital firm IMGE.

Statewide races have also attracted record amounts of money. Secretary of state race contributions have reached $47mn, surpassing their 2018 total of $44mn. These election administrators have gained attention following the events leading up to the January 6 insurrection. Gubernatorial races are set to break 2018 records, having already brought in $1.6bn.

The vast majority of this money has gone towards political advertising, as has historically been the case. AdImpact projected in July that ad spending would reach $9.6bn, surpassing even the 2020 presidential cycle.

Democrats are doubling down on messaging around abortion following the Supreme Court’s momentous decision to overturn Roe vs Wade in June. In governors’ races alone, Democrats have spent more than $20mn on ads related to abortion, nearly four times that of Republicans’ investment in gubernatorial abortion ads.

Democratic strategists point to abortion rights as an issue that will motivate Americans to vote during a midterm year, when voter turnout is typically lower than in presidential elections.

“Part of what determines whether a message is effective is whether people believe that it’s a possibility,” said Megan Clasen, partner of Gambit Strategies, a Democratic digital advertising firm. “In the past, we were never really able to message on Roe vs Wade being overturned because people genuinely didn’t believe that that was going to happen.”

From the other side of the aisle, strategists are advising Republican candidates to focus on record-high inflation and the economy.

“Every staple of a family’s life is rising in cost,” said Eilon. “The most effective strategy is going to be to offer a very strong check to the next two years of a spending agenda that’s going to exacerbate that and [is] likely to deepen the current recession.”

Campaigns in both parties are spending heavily on digital advertising, as TV and radio markets become quickly saturated. Yet traditional broadcast television still represents around half of all ad spending, according to AdImpact projections.

Coveted digital ad space in battleground states with multiple races has driven up prices. “Certain kinds of inventory are functionally selling out or their rates are going up, especially on digital where more of the cost function is done via auction,” said Eilon.

“It’s much harder to persuade people in the same way with, say, a Facebook ad that someone looks at for three seconds versus a forced-view video ad that you can see and hear,” said Clasen.

Though there are still about six weeks left until November 8, early voting has begun in several states, including North Carolina, Virginia and Minnesota. Democrats and Republicans will have to balance their remaining budgets on both persuading potential voters and getting those voters to the polls.