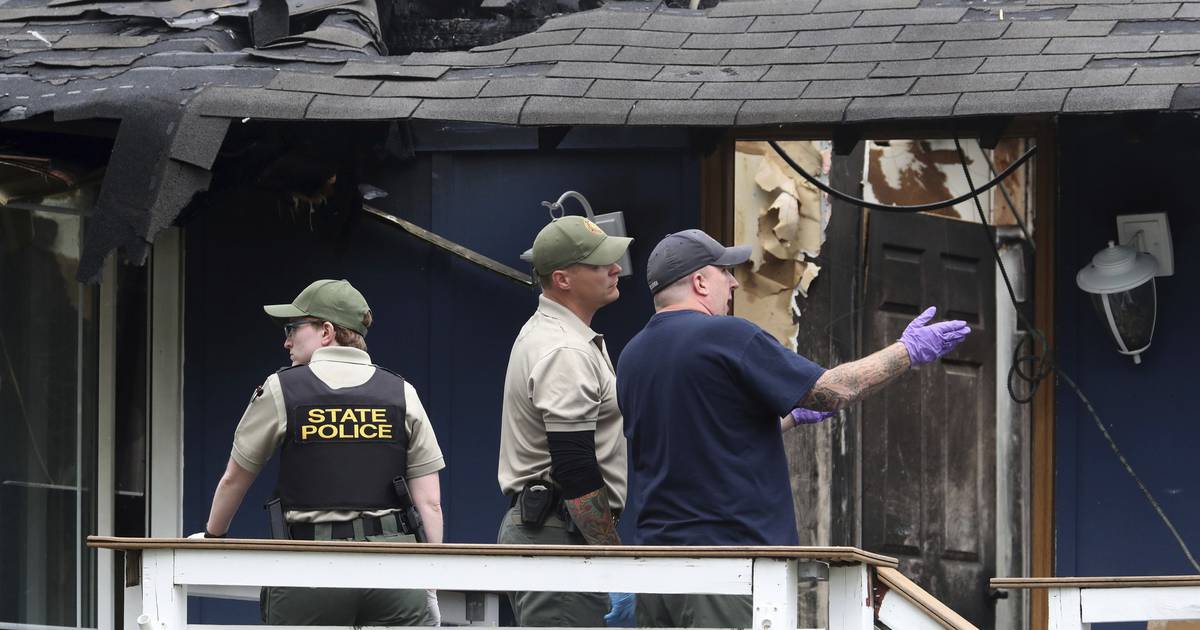 Two men and two women died Friday after Oak Forest police responded to a home for a domestic call, finding three shot outside and a fourth inside after a fire in the home.

All four lived on the 5500 block of Ann Marie Lane in Oak Forest where police responded at 6:35 a.m., saying they found two gunshot victims in the driveway and a third gunshot victim in the roadway south of the home.

Police surrounded the home and said a child was sent out of the home and evacuated, and shortly afterward smoke and flames were seen coming from the home.

Police said after the fire was extinguished, emergency personnel entered and found the fourth deceased person, who they said they believe is the offender. Police had not yet identified which of the four people was found inside.

Oak Forest residents in and around Ann Marie Lane were told to shelter in place as emergency responders were on the scene, according to the city. At about 10:45 a.m., officials said there was no longer a threat to the community, but the investigation continues.

Ryan Ahlgrim, 22, who lives three houses away from where it happened, was sleeping in his bedroom but woke up about 8 a.m.

“I smelled something burning and then my mom came into my room and told me there was something going on,” Ahlgrim said.

He looked out the bedroom window and saw smoke coming from the top of the house. He and his mother, who were alone, were not allowed to go outside after the lockdown was put in place and they were not told what was going on.

“Just that it might be dangerous,” he said they were told.

Then, about 8:45 a.m., Ahlgrim heard five or six loud blasts and then silence.

“We could only assume they were gunshots. It frightened us quite a bit,” he said.

Ahlgrim said they were allowed back outside, but only in their backyard, not the front, about 9 a.m. because firefighters were still dousing the flames and moving equipment around.

By about 9:40 a.m., things had calmed down and the fire was extinguished but even at 2:30 p.m. Ahlgrim, who was still at home, could detect a milder but still acrid scent in the air, he said.

“There’s a giant hole in the top of the house with some burnt embers,” Ahlgrim said.

He and his family, including his grandparents who live next door, were not injured.

“Thankfully it didn’t spread to any of the nearby houses,” he said.

Ahlgrim doesn’t know much about the victims in the house except that he believed he attended high school with a young woman who lived there.

Earlier Friday, Bremen High School District 228 said Oak Forest High School had students and staff sheltering in place as events unfolded. The school is a few blocks north of where the barricade occurred.

News updates from the south suburbs delivered every Monday and Wednesday

”I’d like to extend my condolences to their loved ones. Our hearts are with you during this immensely difficult time,” he said. The high school will have counselors available to meet with students or staff members in need of support, he said.

The district said that the homecoming parade scheduled for Friday had been canceled.

Oak Forest officers arriving at the initial call pulled the three victims who were outside the house into their squad cars and transported them to a safer area to provide aid before they were taken to the hospital, police said.

Police said the South Suburban Emergency Response Team was called out as the suspected offender was still in the home, and police sent a community alert to residents and school leaders to shelter in place.

Oak Forest officials had closed Central Avenue from Independence to 155th Street and 155th between Central and Long Avenue while events unfolded.

Police ask anyone with information to contact detective Sgt. Ryan Burnett at 708‐687‐1376 or [email protected]